Conductive Polymers Industry: How will the expansion in electronics and photovoltaic sectors drive the product demand?

The growth graph of the global conductive polymers market is witnessing a transformational shift in dynamics in the recent times owing to the expanding global semiconductor and electronics industry. Lately, this sector is being characterized by the increasing demand for light weight components and miniaturization, pertaining to their user-friendliness and convenience. The robust proliferation of this trend is rather overt from the fact that prominent companies worldwide are expanding facilities to embrace the lightweight technology fad, pushing conductive polymer market trends.

Citing an instance validating the aforesaid, Sintercom India, an India-based manufacturer and supplier of sintered components for vehicles, has spent nearly INR 110 crores in setting up a manufacturing plant in Maharashtra, for lightweight sintered components. With weight reduction becoming a globally significant parameter in vehicle design and development, numerous companies are now looking forward to embrace newer technology fads in the electronics industry to enhance the vehicle production processes.

The enhancements in antistatic packaging and coatings, as well as the growing use of printed circuit boards, have led to a surge in the demand for these polymeric fibers. Moreover, increasing applications of the product in a range of portable electronic devices will also notably boost the conductive polymers industry size over 2019-2025.

In electronics industry, these polymeric fibers are deployed in lasers used in flat television screens, light emitting diodes, transistors, solar cells, and as displays in mobile phones & mini TV screens. Reportedly, worldwide electronics industry had a market valuation of USD 2.8 trillion in the year 2018 and is poised to register a CAGR of 4% between 2019 to 2025.

Increasing sales of mobile devices will favor conductive polymers industry outlook and offer enormous growth prospects in the future. According to credible statistics, around 1.56 billion smartphones were sold globally in the year 2018, and China is the market leader in the global smartphone market with over 106 million smartphones shipped. Moreover, the number of smartphone users worldwide is projected to surpass 2.87 billion in the year 2020. 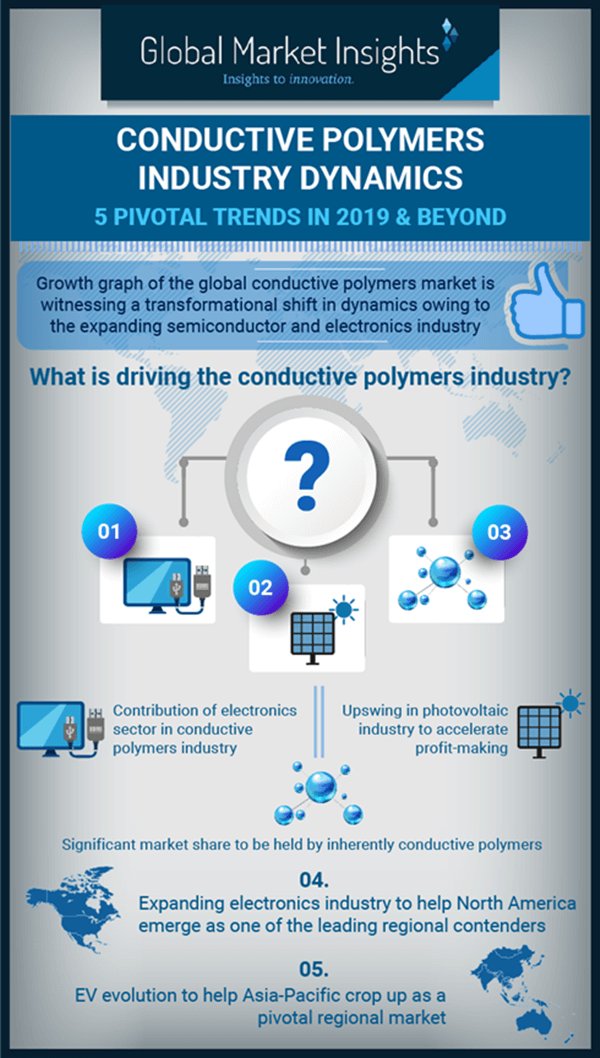 The technological advancements in photovoltaic industry are paving way for amplification in conductive polymers market share, as these polymers are poised to serve as a viable alternative for silicon across a plethora of photovoltaic applications comprising ultra-capacitors, plastic transistors, sensors, chip packaging, and display materials.

In the years ahead, renewable energy market trends are expected to experience a shift towards off-grid installations across various regional terrains, thereby augmenting the demand for photovoltaic materials. Growing environmental consciousness and depletion of natural resources would also propel photovoltaic materials market, in turn, contributing towards conductive polymers industry size.

North America conductive polymers industry is projected to capture majority share by 2025 in the global arena, primarily driven by increasing R&D initiatives, technological advancements, and robust electronics & semiconductor industry in the region. North America is also a proactive participant in global solar power projects and has enforced several limitations on the use of conventional modes of power generation.

For instance, Solar Star, which is the USA’s biggest solar power plant, based in California, has a total power generation capacity of 579 Megawatt. In North America, a number of polymer materials have been tested and made commercially available, which have myriad applications across solar energy industry, packaging, textile, medical, electronics, and others. These factors are bound to fuel North America conductive polymers industry size in the approaching years.

Also, the burgeoning demand for anti-static packaging in the United States will add impetus to electrically conductive polymers market growth over 2019-2025. Anti-static packaging is used across a slew of industries to store, package, and transport items having ESD sensitivity, mainly to protect the equipment from damage.

Increasing consumption of the product for packaging electronic products, medical devices, automotive parts, foods, cosmetic and personal care items will boost regional demand. The nation is anticipated to maintain its command over the market in the coming years, setting it as a lucrative revenue ground for electrically conductive polymers industry.

The Asia Pacific conductive polymers industry is anticipated to expand at a considerable rate in the ensuing years, on account of burgeoning awareness regarding the use of conductive polymers, increasing sales of electronic equipments, and rising acceptance of electric vehicles in the territory. For instance, the government of China had introduced several subsidies back in 2010 to promote electric vehicle sales, majorly powered by its desire to cut-down pollution levels in the nation.

The potential demand for electric vehicles will amplify the demand for sensors, actuators, and batteries, which will eventually boost APAC conductive polymers market size. The key contributing regions of this business space include China, India, Japan, Indonesia, Malaysia, South Korea, Australia, and the rest of Asia Pacific.

Significant market share to be held by inherently conductive polymers

Inherently conductive polymers include polypyrrole, polyaniline (PANI), polyphenylene vinylenes, PEDOT, and others, and are a class of polymers that are known to conduct electricity owing to their chemical structure bonds. PANI reportedly holds a considerable share of conductive polymers industry on account of its widespread deployment in printed circuit board production process for protection against corrosion.

Inherently conductive polymers market share from Polypyrrole segment is slated to witness decent growth in the approaching years. The key factors that can be credited to this growth are material’s high conductivity features and stability in oxidised states. Polypyrrole only degrades when the temperature is more than 150 to 300 °C.

Additionally, Polypyrrole has numerous advantages over other conductive polymers, including easy oxidation reaction, high water solubility, and inexpensive process. However, in comparison to PANI, the price of pyrrole monomers is higher than aniline, making it less attractive for several potential applications.

In a nutshell, the demand for conductive polymers is rising across the world, primarily because of the ability of these polymers to suffice a broad spectrum of applications across an array of industries. Industry participants like 3M Company, Henkel AG & Co. KGaA, DowDuPont Inc., Agfa Gevaert, RTP Company, Lubrizol Corporation, and others are making sizeable investments in research and development, launching innovative products, and entering into collaborations with other companies to traverse new horizons of growth.

According to the latest research report by Global Market Insights, Inc., conductive polymers market size would reach USD 6 billion by the year 2025.