The tech sector was a standout performer through the first nine months of the year, with the NASDAQ gaining as much as 34% into September alone. However, an industry-wide sell-off which began on Sep. 3 continues to impact current levels, leaving the tech-heavy index trading 10.16% below all-time highs, touched just last week. 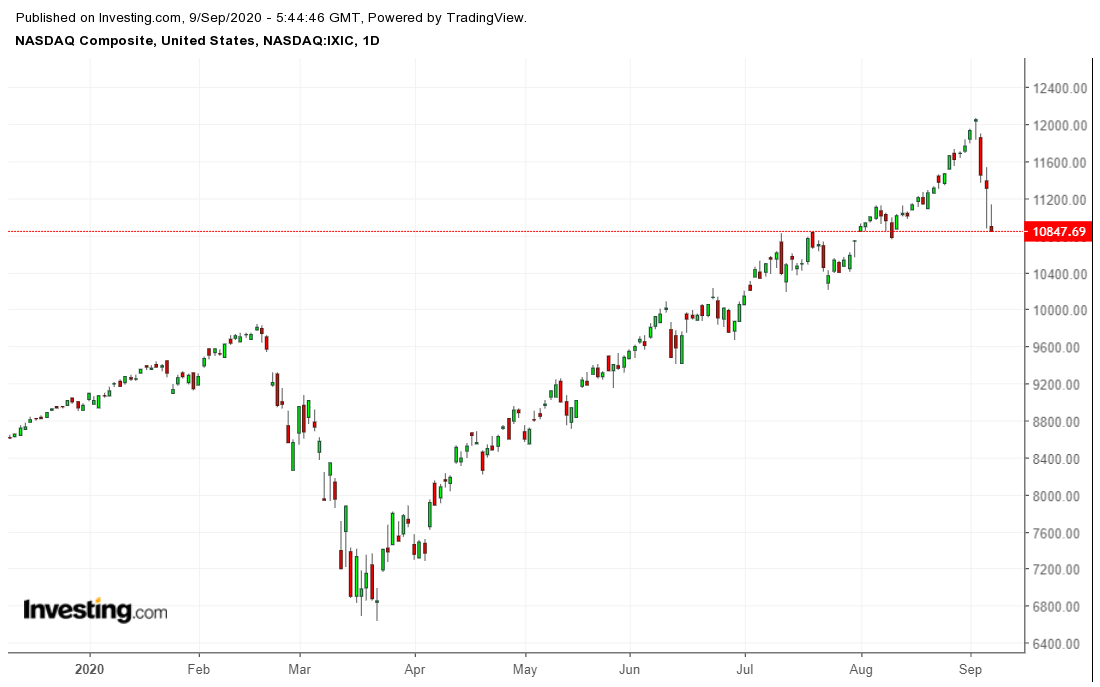 Despite the current pullback, there are more than a few attractive names in the group enjoying accelerated earnings and revenue growth thanks to booming demand for cloud-based offerings amid the COVID-19 pandemic.

Here are three bargains to consider as the sector selloff continues:

Cloudera (NYSE:CLDR) stock has had a remarkable run since falling to a bear-market low of $4.76 on March 18. At one point, shares of the Palo Alto, California-based enterprise-data company soared almost 200%, but the general sell-off in tech knocked some of the wind out of the high-flyer’s sails.

Shares–which closed at $10.89 on Tuesday–are about 22% below their recent 52-week high of $14.10, reached on Sep 2., despite beating expectations on results and its guidance last week.

Cloudera delivered earnings per share of $0.10 for the three months ended July 31, compared to a loss of $0.02 per share in the same quarter a year earlier. Consensus estimates called for EPS of $0.07. Revenue meanwhile increased 9% year-over-year to $214.34 million, reflecting a surge in demand for its Cloudera Data Platform Private Cloud services as the COVID-19 pandemic accelerated enterprise digitization trends.

For the current quarter, Cloudera forecasts revenue in a range of $207 million to $210 million, above consensus estimates calling for revenue of $205.30. Fiscal 2021 guidance has also received a lift. Previously Cloudera expected revenue between $825 million to $845 million but now projects that figure to stand at $853 million.

Fastly (NYSE:FSLY), which helps other businesses speed up their websites, apps, video and streaming offerings on mobile devices, has seen its stock endure some turbulence lately.

After enjoying massive year-to-date gains of as much as 487% through early August, shares–which ended at $81.08 yesterday–are now about 31% below the record high of $117.79 reached on Aug. 5, even though the online content delivery network specialist’s second-quarter earnings and revenue blew past consensus estimates last month.

The San Francisco-based company, which went public in May 2019, reported earnings of $0.02 per share in the three months ended June 30, improving dramatically from a loss of $0.16 per share in the same quarter a year earlier. Analysts on average were expecting a loss per share of $0.01.

Revenue surged almost 62% from the year-ago period to $74.66 million, benefiting from the rapid adoption of its services as more people are working from home.

The cloud-computing company said its total customer count rose by 114 in the second quarter to 1,951, the largest quarterly growth since its IPO in mid-2019.

“Our strong fundamentals drove continued customer expansion on our platform bolstered by elevated traffic levels across the internet as people continued to stay home,” Fastly said in its earnings statement.

Looking ahead, the company forecasts third-quarter revenue of $74.5 million at its midpoint of guidance, nearly unchanged from the second quarter, due to concerns over what a potential TikTok ban in the U.S. could mean to the company’s top-and-bottom line.

CNBC reported that “Joshua Bixby, Fastly’s CEO, said on his company’s earnings call that TikTok is its biggest customer, accounting for about 12% of revenue in the first six months of the year.” The Trump Administration has threatened to ban TikTok due to concerns over data privacy.

Cloudflare (NYSE:NET) set the market on fire through the first eight months of the year before suddenly losing momentum in early September. Shares of the cloud networking and security solutions provider have jumped 93% in 2020, even after a recent pullback which pared YTD gains of as much as 165%.

The stock–which settled at $32.94 last night–is currently trading about 27% below the all-time peak of $45.28 reached on Aug. 7, despite reporting earnings and revenue which easily topped views in the second quarter.

The San Francisco-based company, which released results on Aug. 6, showing it lost $0.03 per share, narrowing from a loss of $0.07 per share in the year-ago period. Revenue rose to $99.72 million for the period ended June 30, up an impressive 48% from the same quarter a year earlier, as it benefited from strong demand for its cybersecurity services and cloud-based networking due to the spike in internet traffic.

“We delivered a strong second quarter, with revenue increase up 48% year-over-year, and added a record number of both large and paying customers,” Chief Executive Matthew Prince said in the company’s earnings release.

Looking ahead, Cloudflare sees revenue rising to a range of $102.5 to $103.5 million in the third-quarter ending in September, indicating revenue expansion of 39% to 40%.