THE Philippines inched up one spot in an annual global ranking of countries’ ability to attract and retain a skilled workforce, but continues to lag behind other Asia-Pacific economies.

The country ranked 48th out of 63 economies in the IMD World Competitiveness Center’s World Talent Ranking 2020 report published on Thursday, rising one spot from 49th in 2019 and seven places from 55th in 2018.

In an e-mail, IMD said the Philippines’ overall ranking improvement “is due to worse performance by other countries.” 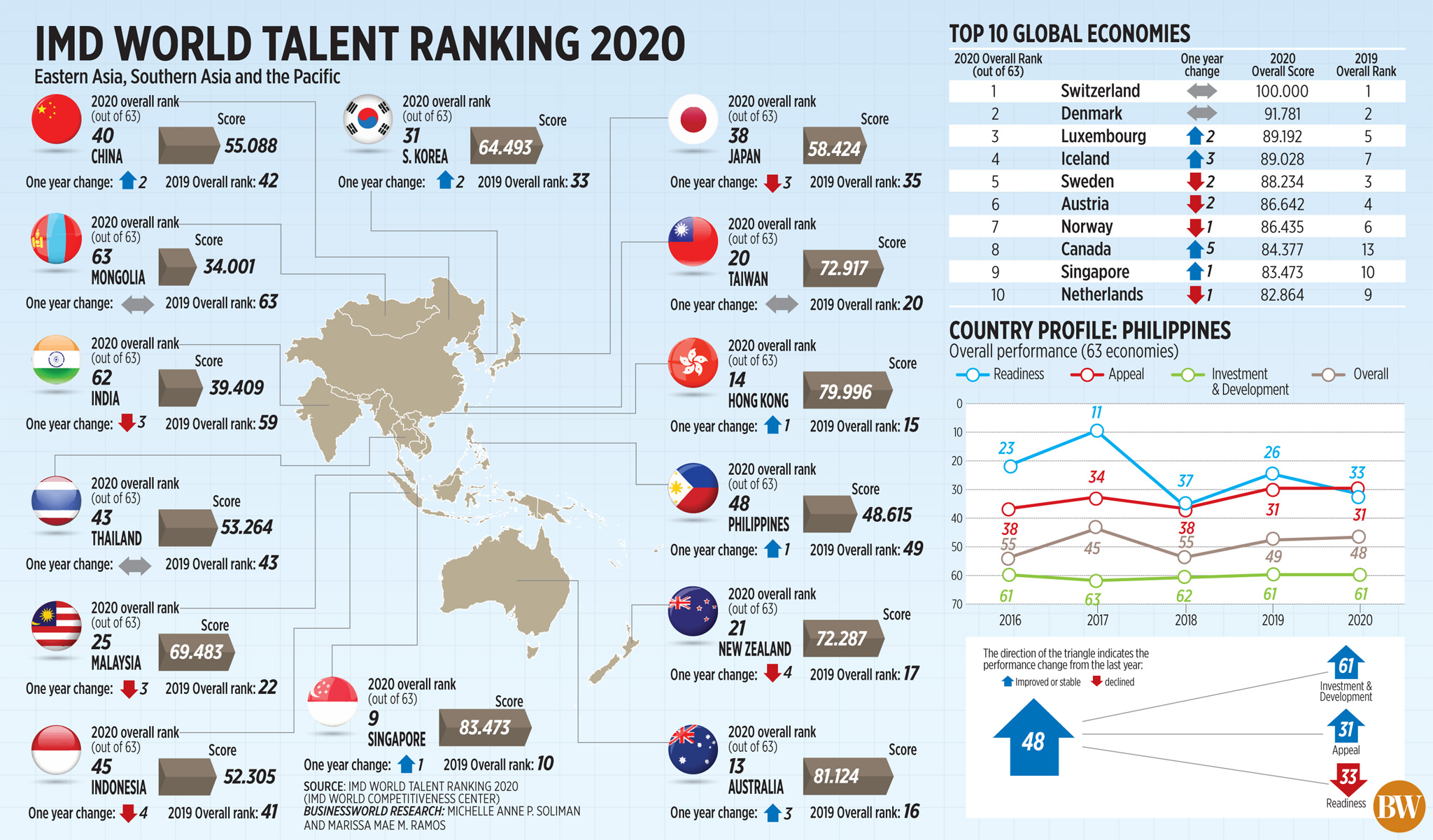 The Philippines ranked 12th out of 14 economies in the Asia-Pacific, with Singapore, Australia, and Hong Kong taking the top spots.

Asia-Pacific economies did well in the appeal factor, remaining attractive to foreign labor, IMD said in a press release.

The IMD report took into account three equally weighted factors: “investment and development” in homegrown talent, the “appeal” or the extent to which the country attracts overseas talent, and “readiness” or the availability of skills in the talent pool.

The Philippines’ rankings in these factors remained the same from the previous year, except for the “readiness” factor, which fell seven spots to 33rd place from 26th the previous year. Under “readiness,” the country fared poorly in inbound student mobility and educational assessment. The Philippines also dropped to 13th place in terms of availability of skilled labor, from third spot a year earlier.

The country ranked third, however, in labor force growth.

Country “appeal” remained at 31st place from the previous year, with the Philippines ranking 44th for the brain drain subfactor and 48th for quality of life.

“The country performs well in the personal income tax and cost-of-living subfactors, and shows an increase in the worker motivation subfactor,” IMD said in an e-mail.

The Philippines also retained its 61st spot in the “investment and development” factor.

“This is due to low ranks in most subfactors, with those related to education showing the worst performance,” IMD said. The Philippines ranked poorly in pupil-to-teacher ratio and public expenditure on education rankings.

Some of the country’s overall strengths were in effective personal income tax rate (8th), graduates in sciences (11th), and cost of living (15th).

European Chamber of Commerce of the Philippines President Nabil Francis said the business group welcomes the country’s improvements in terms of talent competitiveness.

“This demonstrates the immense potential of the country’s relatively young, dynamic, and highly literate population to be a globally competitive workforce,” he said in a mobile message.

Switzerland and Denmark held the first and second position in the IMD World Talent Ranking for the fifth straight year. Luxembourg, Iceland, and Sweden rounded up the top five spots. European countries’ top performance was attributed by IMD to “the continent’s excellent education and good mobility.”

“For 2020, the most talent-competitive economies are those that invest in education… and those that appeal to an international talent pool,” IMD said.