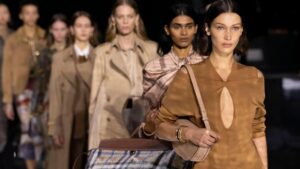 Bosses at Burberry have warned that the government’s plan to scrap duty-free shopping will mean the UK will “lose business” and that it will add a third challenge for the country’s retailers on top of Covid-19 and Brexit.

The British luxury brand, which has suffered from the closure of its boutiques and a slump in tourist shoppers, made the comments yesterday after it reported a 30 per cent fall in sales to £878 million for the six months to September 26 while pre-tax profit plunged by almost two thirds from £193 million to £73 million.

Burberry said that while sales had tumbled by 45 per cent in the first quarter, which included the period when 60 per cent of its shops were shut, it had enjoyed a recovery in the second quarter with sales down by only 6 per cent. Crucially, the brand had returned to sales growth in October but 10 per cent of its boutiques are now shut in the second wave of lockdowns in Europe.

Burberry was founded in 1856 by Thomas Burberry, who created the gabardine waterproof fabric used in its famous trench coats. It is Britain’s biggest luxury brand, valued at £6.77 billion. Shares in Burberry were 45p, or 2.77 per cent higher, to £16.72 in mid-morning trading.

Burberry’s post-lockdown sales recovery was credited to its popularity with new, young, urban shoppers who are flocking to its check-print puffa coats and updated range of luxury leather bags designed by Riccardo Tisci. Burberry has focused its revival on appealing to young, digitally savvy shoppers and recruited celebrities including the model and reality TV star Kendall Jenner to front its campaign. It has boosted its social media presence, launching Burberry-branded video games and streaming its runway fashion show.

Burberry, which has also teamed up with Marcus Rashford, the England footballer, on a youth charity project, revealed that sales on its website had doubled at the start of the year.

Marco Gobbetti, 61, chief executive, said: “Though the momentum we had built was disrupted by Covid-19 at the start of the year, we were quick to adapt.”

Julie Brown, 58, chief financial officer, said that its UK business had suffered a significant hit from the loss of international tourists, who typically accounted for two thirds of shoppers at its British boutiques. She revealed that a “large proportion of those” reclaim VAT and losing that right under government proposals on tax-free shopping meant they might go to other European cities instead. About £28.4 billion was spent by visitors last year with £2.5 billion reclaimed, according to the Centre for Economics and Business Research.

Although a Treasury spokesman contested the figure and said that 92 per cent of tourists do not use the VAT retail export scheme, he said that extending it to EU visitors could increase costs to the Treasury from £500 million to £1.4 billion a year. Tax-free shopping will still be available when goods are posted to overseas addresses but Ms Brown said Burberry’s shoppers “want to take the goods with them — they feel it’s safer”.

“What we are concerned about is that while Burberry will pick up some of that tourist spend overseas, the UK will lose the business,” she said. “We have clearly had a significant hit from Covid, because of the loss of the tourists, then Brexit and the VAT, so we have three levels of challenges for the UK market.”