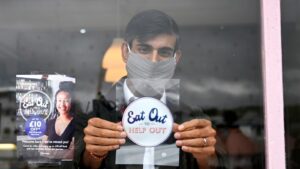 Restaurants, cafes and pubs claimed more than £849m through the government’s month-long “eat out to help out” scheme, as diners bought more than 160m discounted meals in August.

More than 49,000 businesses had made a claim for the government subsidy by the end of September, according to official HMRC figures.

The scheme, designed to draw diners back into hospitality venues over the summer to support the sector, proved extremely popular with consumers.

The initiative offered a half-price discount up to a maximum of £10 per head on food and non-alcoholic drinks from Mondays to Wednesdays in August. Diners received an average discount of £5.24 per meal, according to the figures.

The scheme was such a hit that many restaurants called on the chancellor to extend it. As a result of its popularity, the scheme has cost the Treasury over two-thirds more than the £500m Rishi Sunak set aside for it in the July mini-budget.

Use of the scheme increased steadily throughout August, as the number of discounted meals and total value of claims grew each week.

A study from the University of Warwick suggested that eat out to help out could have directly caused a sixth of new coronavirus case clusters over the summer, a claim rejected by the Treasury.

Official figures showed more than half  of claims were made by restaurants, while just under a third were made by pubs.

More than nine in 10 claims were made by businesses with just one participating outlet, although between them these venues only claimed half of the total discount, meaning chains received larger amounts of money from the government.

Major nationwide chains including McDonald’s, Burger King, Nando’s, Pizza Hut and JD Wetherspoon signed up to the scheme, as well as the coffee retailer Costa.

HMRC said 172 large businesses, with a total of more than 18,000 outlets between them, took part in the initiative, representing almost a quarter of participating locations.

The figures showed less than 1% of claims were filed by businesses with more than 25 outlets, although these companies accounted for a third of the meals claimed for, and a quarter of total discount claimed.

Read more:
‘Eat out to help out’: venues claimed more than £849m through scheme