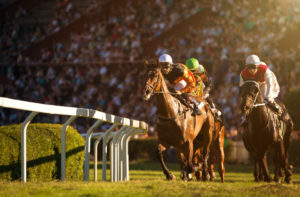 Australia’s biggest bookmakers have reported increased profits during the opening half of the year despite the sporting landscape being severely hit by the Covid-19 global pandemic.

While Australian sport was less affected than the worldwide calendar during the early months of the outbreak from March, the popular sports of NRL (Rugby League) and AFL (Australian Rules) were halted Down Under.

The nature of the horse racing jurisdictions in Australia, which are governed state by state rather than as a country, and the decision to close internal borders has proven to a saviour for Australia’s biggest bookmakers.

The racing industry accounts for around 75 per cent of all money wagered in Australia, so the ability to keep the show on the road in a Covid secure way was clearly welcome from the point of view of the betting operators’ bottom line.

Racing continued in most instances unaffected, albeit behind closed doors with racegoers banned from attending live on track – as looks likely to be the case for the biggest event of all, the Melbourne Cup in November. That has resulted in an increase in betting online during the lockdown around Australia, as reported in a study released by the Australian Gambling Research Centre(AGRC).

In particular, the industry saw a major increase in online gambling spend by young males during the lockdown periods. They form part of an increase from 62 per cent of the population gambling online to 78 per cent during the pandemic.

The study also showed that one in three Australians surveyed had signed up for a new betting account in June and July – regardless of whether they already had an account with an alternative bookmaker.

Young males aged between 18-34 formed almost four-fifths of the new betting accounts created. That age bracket also saw an average monthly spend on gambling rise from $687 AUD to $1,075 in the research conducted by the AGRC.

On the flip side, the average monthly spend dropped among both male and female gamblers over 34 during the same period.

All of that played out during a period of isolation at home and job losses, sparking fears that boredom was a major reason behind the rise in online gambling. It also coincided with the temporary closure of many land-based TAB betting shops and units, which are located in pubs and populated areas.

AFL, NRL and English Premier League soccer betting saw major increases in bets placed when all three sports returned, as did novelty betting and weather temperature betting when much of the sporting calendar came to a grinding halt.

Major Australian bookmakers backed up the report with the financial report released during the pandemic.

Tabcorp, owners of Australia’s most famous betting brand TAB, saw turnover grow to $7.1 billion AUD in the 2019/20 financial year (up 3.8 per cent). The move to online gambling was underlined by the fact that TAB’s retail business dropped 27.8 per cent to $5.4 billion AUD.

Sportsbet, now owned by Flutter Entertainment, reported a 45 per cent rise in online net revenue for the opening six months of 2020 with operating profits almost $200 million AUD to June 30.

The GVC-owned Ladbrokes brand also saw a similar rise in profits. They reported a 43 per cent increase in the opening six months of 2020 despite the pandemic affecting the latter three months.