THE country’s unemployment rate further eased in October from record levels in April, as the economy continued to gradually reopen, the Philippine Statistics Authority (PSA) reported on Thursday.

Preliminary results of the PSA’s October round of the Labor Force Survey (LFS) put the unemployment rate at 8.7%, equivalent to 3.813 million jobless Filipinos in October. 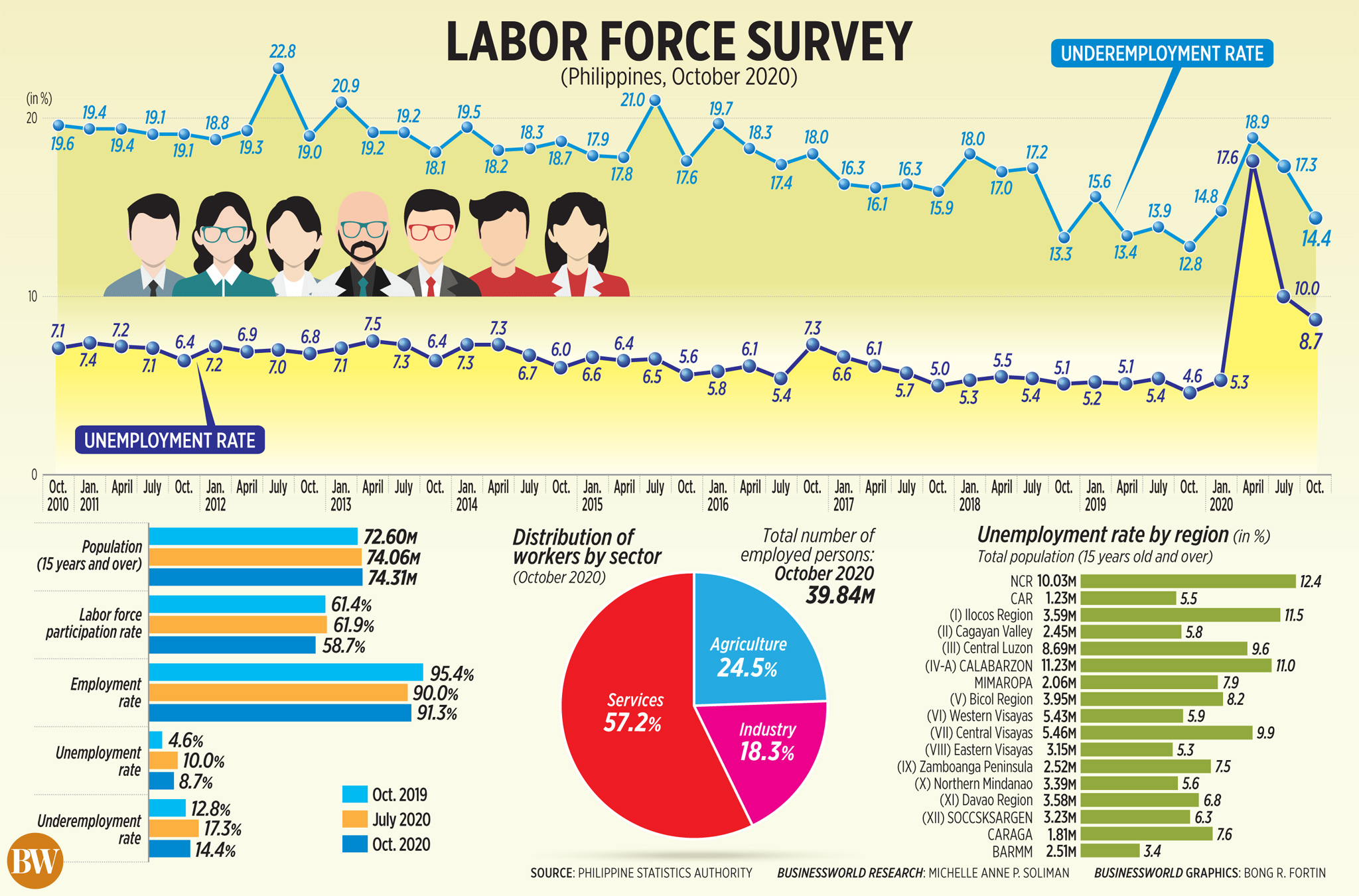 Nevertheless, the October data showed a move towards recovery in the job market following the peak unemployment rate of 17.6% in April, which is equivalent to 7.228 million individuals unemployed.

“This improvement in the unemployment rate was driven by the reopening of the economy and it could have been lower if the economy were opened further, coupled with the provision of safe and sufficient public transport,” Acting Socioeconomic Planning Secretary Karl Kendrick T. Chua was quoted in the National Economic and Development Authority (NEDA) statement as saying.

Likewise, the underemployment rate, or the proportion of those already working but still looking for more work or longer working hours, was 14.4% in October, down from July’s 17.3%, but worse than the 12.8% a year ago.

The decrease in underemployment rate in October from July means the quality of jobs is improving, said NEDA’s Mr. Chua.

“This proximity to normalcy means that the informal sector is performing and the impact on poverty may be less severe than initially estimated,” he added.

The size of the labor force was approximately 43.649 million out of the 74.307 million Filipinos aged at least 15 years old in the October round of the LFS.

The employment rate, which is the proportion of the employed to the total labor force, stood at 91.3% in October, representing 39.836 million employed Filipinos versus 90% in July, representing 41.306 million.

NEDA said while the improvement in the unemployment rate led to a reduction of around 800,000 unemployed Filipinos, the decline in the LFPR resulted in a net employment reduction of 1.5 million in October compared with July.

The lower LFPR was attributed to a number of factors, including higher remittances from overseas Filipinos and the resumption of schooling that led some parents to stay at home to help their children with online classes.

Mr. Chua also noted the impact of typhoons Nika, Ofel, Pepito, and Quinta on employment in October. According to the state agency, these contributed to the reduction of agriculture employment by 1.1 million, or about 70% of the 1.5 million jobs lost between July and October this year.

“Workers in the provinces also faced difficulty in returning to work given inter-province transport restrictions, and contributed to [around 486,000] in the industry sector,” NEDA said.

The reduction in employment was “tempered” by the net gain in the services sector, in which NEDA attributed it to “increased operational capacity and further relaxation of quarantine restrictions.” Between July and October, the sector posted a net gain of around 124,000.

In a statement to reporters, ING Bank NV Manila Senior Economist Nicholas Antonio T. Mapa said that while the decline in the national unemployment rate to 8.7% in October was a “welcome development,” the jobless rate remained in double-digits for the National Capital Region (12.4%) and Calabarzon Region (11%).

“Given that the bulk of economic activity is generated by these two regions, we can say that the economy will remain hobbled in the near term as scores of Filipinos are still without a job,” Mr. Mapa said.

OUTLOOK
Economists expect the jobs situation to rebound in the coming quarters as quarantine restrictions continue to be loosened, but that it would take some time for the labor market to go back to pre-pandemic levels.

“If the 2021 [national budget] is approved on time and if they are supplemented by some of the proposed bills in Congress, we might see a more meaningful improvement in the April 2021 LFS. Otherwise, it will take at least another year for us to return to pre-pandemic labor force stats,” said Bank of the Philippine Islands (BPI) Lead Economist Emilio S. Neri, Jr., in an e-mail.

The rebound would also depend on the workers’ confidence to return to the job market as the government rolls out its vaccination plan for next year.

“[W]e need to see a bigger public budget for vaccination for workers if we are to see them continue to gain confidence to work or apply for work again. Even workers in the private sector may not regain confidence to work, spend or travel unless they are aware that their counterparts from the public sector are also getting vaccinated,” Mr. Neri said.

In a separate e-mail, UnionBank of the Philippines, Inc. Chief Economist Ruben Carlo O. Asuncion said the labor market will likely go back to pre-pandemic levels by 2022 as next year’s likelihood of a rebound “may be low.”

“[T]here will be a lag before minimum-wage earners will feel the impact of better and positive outlook because of the vaccine developments. Markets will improve, but investment recovery to create more jobs will take time,” Mr. Asuncion said in an e-mail.

For ING’s Mr. Mapa: “With a labor market as fractured as it is now despite opening up the economy, the need for a more vigorous fiscal stimulus plan cannot be emphasized more.” — Ana Olivia A. Tirona