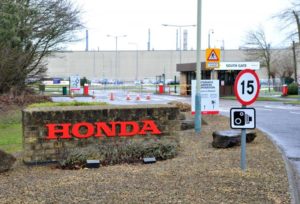 Honda is to pause production at its UK plant today because of a shortage of car parts caused by delays in getting parts into Britain in the run-up to the end of the Brexit transition period, according to reports.

The car company, which relies on “just in time” and “just in sequence” supplies, told the BBC on Wednesday the decision was “due to transport-related parts delay” as ports are hit by Brexit demand and coronavirus restrictions.

“The situation is currently being monitored with a view to restart production as soon as possible,” Honda said.

Honda’s Swindon factory in south-west England built just under 110,000 cars last year but is due to close permanently next year.

The company is looking at alternative arrangements, such as flying parts in, but production could grind to a halt as early as Wednesday.

The carmaker joins a growing number of businesses complaining of disruption that can be traced back to the ports. Builders are reporting shortages of power tools, timber and roof tiles while retailers are struggling to get stock into stores in time for Christmas.

Roads in Kent were hit by lorry queues on Tuesday for the fourth day in two weeks, with the congestion caused by a combination of Brexit stockpiling and a reduction in the number of ferries because of Covid.

Ten days ago five-mile tailbacks developed on the M20 after France started to test its new immigration system.

Operation Brock contingency plans for Brexit on Kent motorways will be introduced on Friday ahead of the end of the transition period.

The situation at the ports has been described as a perfect storm with operators overwhelmed by a surge in freight volumes at a time when their ability to handle it is hampered by coronavirus restrictions.

Since September, the country’s biggest container port, Felixstowe, has been struggling to cope as firms rushed to replenish stock after lockdown ended while simultaneously building stockpiles before the final Brexit deadline.

Last month, the Guardian revealed that 11,000 containers of government-procured PPE were part of the problem at Felixstowe. That backlog has since been reduced to about 4,000 and should be cleared by Christmas.

Congestion at Felixstowe is a problem for the whole country as it handles about 40% of all the containers coming into and out of the UK. However, the congestion has spread to other ports including Southampton and London Gateway.

The Builders Merchants Federation told the Guardian that port delays were becoming a “major issue” with shipments taking up to four weeks to get through. The situation was of major concern because it was preventing companies from building up Brexit stockpiles.

In recent weeks the picture of congestion has prompted vessels to “cut and run” – either partially unloading or skipping UK calls altogether and dumping cargo at Rotterdam, Antwerp and Zeebrugge instead. Some carriers are discussing not calling at Felixstowe until February because of fears it will remain clogged.

The disruption faced by Honda is a potentially worrying signal as the Brexit talks go the wire. Carmakers have been moving cars and parts both ways across the Channel to make sure they can cope if the UK and EU fail to agree a trade deal.