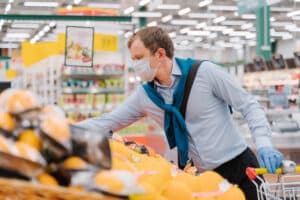 November was the biggest month ever for UK grocery sales with shoppers spending almost £11bn as the return of lockdown in England drove supermarket purchases of food and alcohol.

Sales of turkey and alcohol were up by just over a third and festive light sales soared 238% in November, according to analysts at Kantar, as shoppers brought forward preparations for Christmas and began treating themselves at home while pubs and restaurants were closed.

While mince pie sales slipped 8%, as social distancing rules meant there was less celebrating with friends and colleagues, cream liqueur sales doubled as festive drinking kicked off at home.

Fraser McKevitt, the head of retail and consumer insight at Kantar, said total grocery sales rose by 11.3% in the three months to 29 November: “Many people have begun the countdown to Christmas 2020 already, using more time at home to go big on festive revelry.”

With lockdown in place across England and parts of Scotland for the entire month and until 9 November in Wales, online grocery shopping reached a new peak of 13.7% of the market last month, up from about 7% before the pandemic.

Such was demand for Christmas slots, Tesco was forced to apologise after customers signed up to the supermarket’s subscription service were forced to join an online queue for hours in order to secure a festive food delivery.

Shoppers are likely to be stocking up early to avoid queues caused by social distancing during the Christmas rush, but Kantar is predicting that sales in December will be even higher than last month – at close to £12bn, £1.5bn more than last year.

Mike Watkins, head of retailer insight at analysis firm Nielsen UK said: “With the peak Christmas period fast approaching, there are limited opportunities for shoppers to entertain this year and any gatherings that do take place will be smaller. We can see that shoppers are preparing for this where they can – buying packaged grocery, alcohol and frozen food – and many have planned their online orders early.”

Uncertainties around Brexit, further high street lockdowns and the scale of Christmas entertaining – as well as the risk of needing to self-isolate – helped drive up sales of frozen foods by a fifth, according to analysts at Nielsen.

Only a quarter of shoppers intend to spend less than usual on Christmas groceries this year, according to Nielsen, with half of those consumers saying they would be entertaining less, while more than a third cited financial concerns.

The strong November figures are another boost for supermarkets and discounters which have handed back close to £2bn in business rates relief after an outcry that they received a tax break while sales soared during lockdown.

While supermarkets have been touted as the big lockdown winners, independent convenience stores outgrew all their bigger rivals, apart from Iceland, pushing their sales up by 17%. Iceland’s sales rose 21% partly thanks to increased demand for frozen foods, according to Kantar.

The next fastest growing retailer was German discounter Lidl, with sales up just under 14%, followed by Morrisons and Waitrose, both of which have been rapidly increasing their online sales. Aldi, Asda and Tesco lost market share despite sales rising by more than 7%.