THE COUNTRY’S biggest banks became less profitable in the third quarter as they continued to boost loan loss reserves amid an increase in bad loans and tighter lending standards.

Money lent by banks in the form of loans and receivables reached P9.434 trillion in the July to September period, 0.74% less than P9.505 trillion last year. 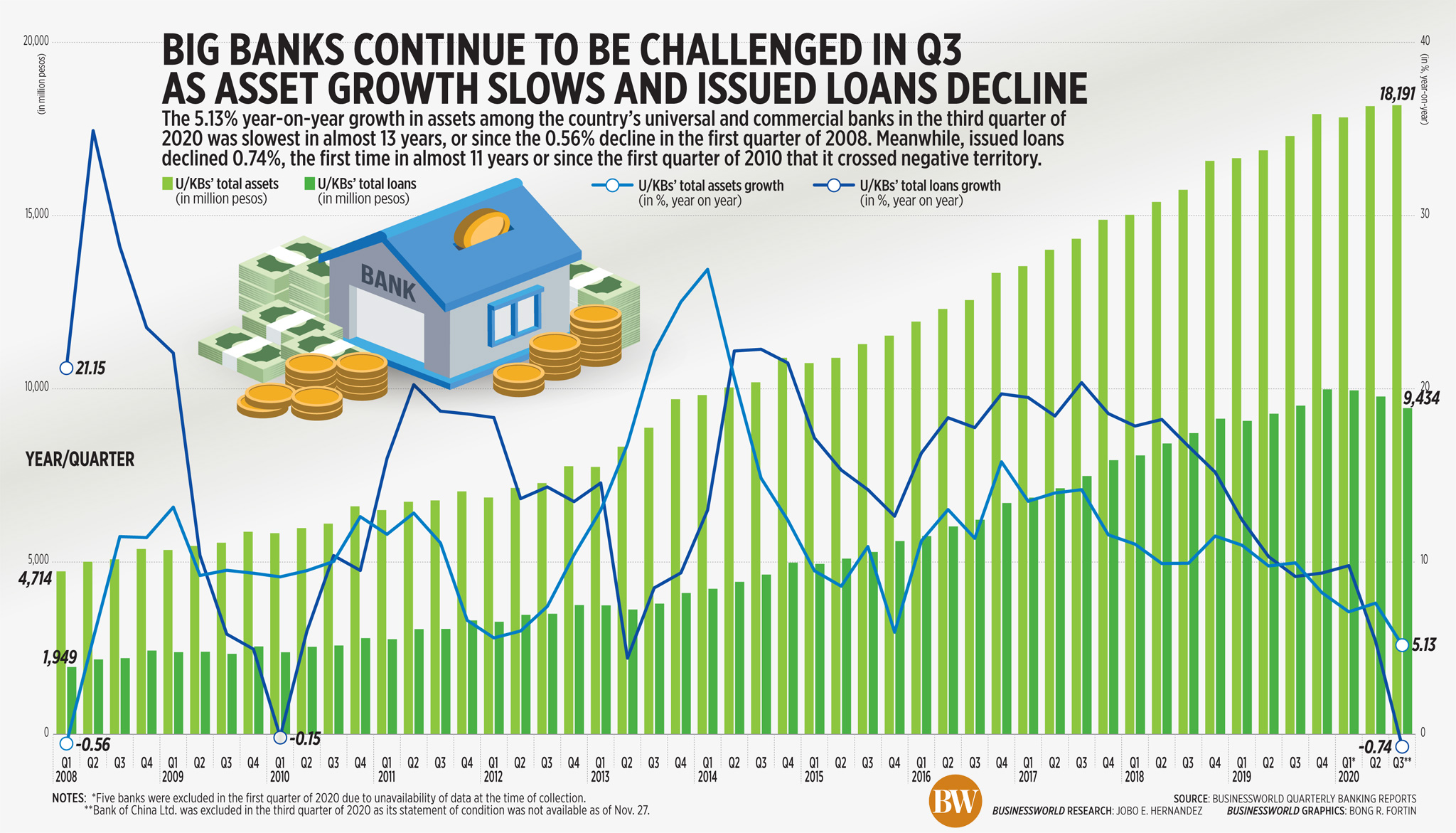 The third-quarter result marked historical lows. For assets, this was the most sluggish growth in almost 13 years, or since the 0.56% decline in the first quarter of 2008 and the 3.78% growth in the fourth quarter of 2007.

For loans, this was the first decline in almost 11 years, or since the first quarter of 2010 when it went down by 0.15%. The last time it recorded a quicker decline was in the fourth quarter of 2003 when loans decreased by 4.17%.

In terms of profitability, the median return on equity (RoE) further slipped to 4.13% from 4.89% in the second quarter and 6.95% in the third quarter of 2019. RoE measures how well a company makes use of the funds from shareholders to generate income and is calculated as the ratio of net profit to average capital.

In terms of loans issued, BDO remained on top with P2.136 trillion, followed by BPI at P1.377 trillion and Metrobank at P1.198 trillion.

Among banks with assets of at least P100 billion, the Manila branch of Japan’s MUFG Bank Ltd. and government-run Development Bank of the Philippines (DBP) posted the fastest year-on-year asset growth at 48.31% and 34.74%, respectively. Robinsons Bank Corp. came in next with 29.16%.

BDO had the most deposits with P2.575 trillion, with LANDBANK and Metrobank following suit with P1.977 trillion and P1.735 trillion.

The bad loan ratio — gross bad loans in proportion to total gross loans — worsened to 3.57% in the third quarter from 2.02% in the preceding three months and 1.66% last year. This was the highest since the BSP introduced a new reporting standard that took effect in the first quarter of 2013.

Before this, banks presented bad loan numbers that already excluded loans that were fully provisioned as of the last BSP examination. The current method does not allow this, and distinguishes bad loans without deductions (gross nonperforming loans, which are used in this report) and to bad loans minus specific allowance for credit losses (net nonperforming loans).

Similarly, their nonperforming asset (NPA) ratio — or the nonperforming loans and foreclosed properties in proportion to total assets — rose to 1.24% from 0.91% in the previous quarter and 0.75% in the third quarter of last year. This was also the highest since the current reporting standard.

As a percent of total assets, foreclosed real and other properties inched down to 0.29% in the third quarter from 0.30% on the previous quarter.

The banks’ bad loan coverage ratio, which is the ratio of the total loan loss reserves to gross nonperforming loans, fell to 102.76% compared with 123.2% in the previous quarter and 107.97% last year.

On the other hand, banks’ ability to absorb losses from risk-weighted assets also improved as their median capital adequacy ratio rose to 21.02% from 20.65% in the preceding quarter.

The ratio remained well above the regulatory minimum of 10% set by the BSP as well as the international minimum standard of 8%.

Bank of China Ltd. was not included in the report because its statement of condition had not been available when the compilation of financial data was concluded on Nov. 27.

BusinessWorld Research has been tracking the financial performance of the country’s big banks on a quarterly basis since the late 1980s using banks’ published statements.

The full version of BusinessWorld’s quarterly banking report will soon be available for download on www.bworldonline.com.