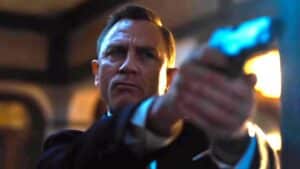 The film studio behind James Bond is up for sale with a likely asking price of more than $5.5 billion, it was reported yesterday.

The company’s portfolio includes the Metro Goldwyn Mayer and Orion Pictures film studios, a film library of more than 4,000 titles, including Silence of the Lambs, The Terminator and the Rocky and Hobbit franchises, and about 17,000 hours of television shows, such as The Handmaid’s Tale.

The widespread closure of cinemas has hurt film studios, which have been forced to delay releases, suspend production or cancel filming altogether. MGM has pushed back the release of No Time to Die, the latest instalment of the long-running James Bond movie series, from November this year to April next year.

MGM is seeking buyout interest from Hollywood film studios, international media groups, private equity investors and “blank cheque” investors, the Journal reported. Anchorage Capital, the New York hedge fund that is the company’s largest shareholder, is under pressure from its investors to sell, the newspaper said.

In 2018, MGM ousted Gary Barber, 63, as its chief executive for engaging in private conversations with Apple about a potential $6 billion sale of the company. Kevin Ulrich, chairman of MGM and co-founder of Anchorage Capital, said at the time that he could sell the company for more than $8 billion within three years.

MGM co-owns the James Bond franchise with Danjaq, a holding company controlled by the family of Albert Broccoli. The late Hollywood producer was behind several James Bond films, including Dr No, the first, in 1962.

The Warner Bros film studio said this month that its 2021 catalogue of 17 films would be available to stream on HBO Max at the same time as they were released in cinemas. Warner Bros releases planned for next year include The Matrix 4 and Dune. AT&T, the American media and telecoms group, owns Warner Bros and HBO.

Read more:
Shaken by the past year James Bond film studio stirs itself for sale