THE Philippines is set to become the 22nd biggest economy in the world over the next 15 years despite the disruption caused by the coronavirus pandemic, a report showed.

The London-based Centre for Economics and Business Research (CEBR) in its World Economic League Table (WELT) 2021 released this month said that the Philippines will move up 10 spots on the list by 2035 from its current 32nd position this year.

“Although the pace of economic growth in past years has been impressive, it is important to note that the population has also been rising rapidly, growing at an average annual rate of 1.5% between 2015 and 2020,” the report said. 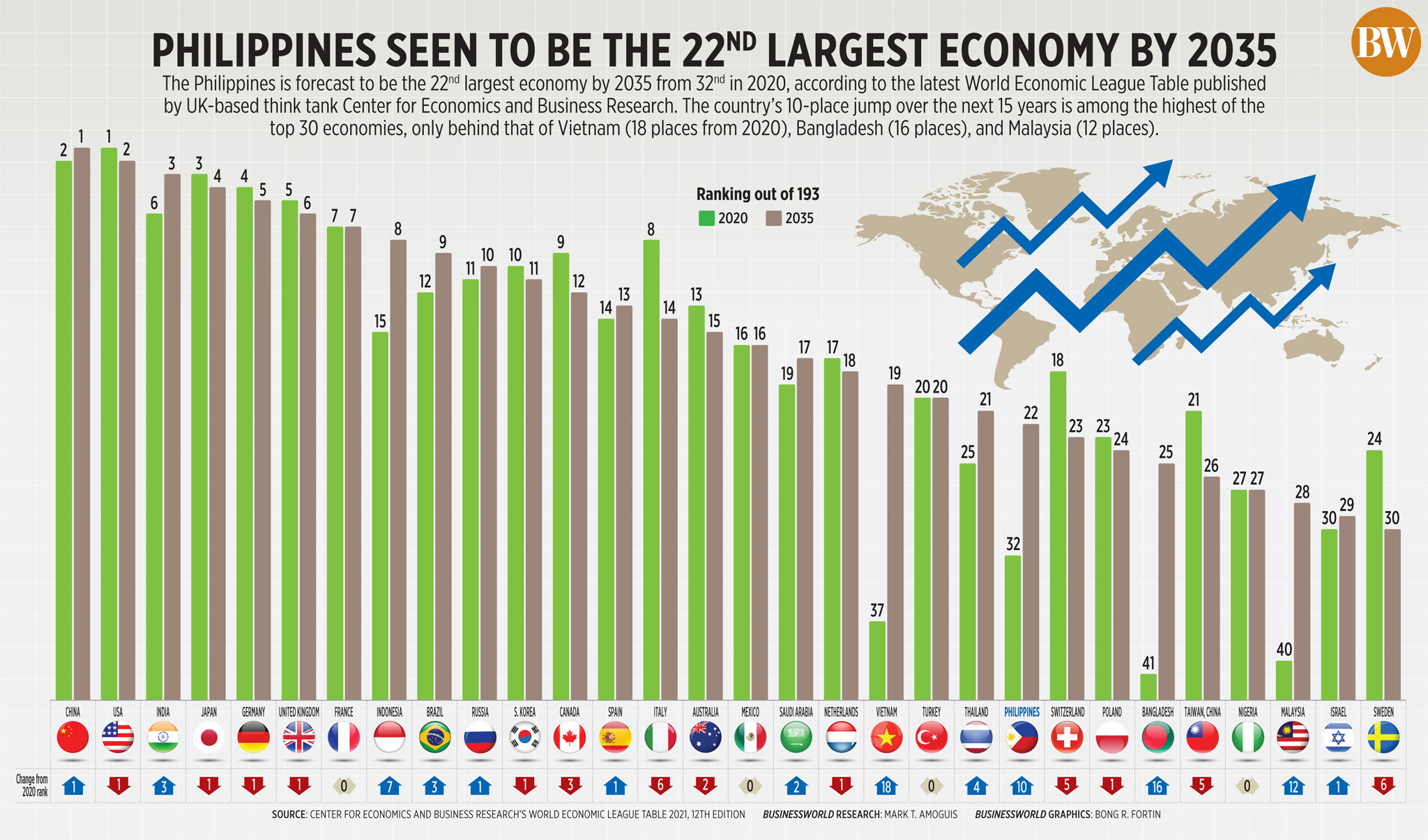 CEBR noted the Philippines faced economic disruptions due to the pandemic, with the economy expected to contract by 8.3% this year.

The country plunged into its first recession in nearly 30 years in the second quarter, as economic activity was hampered by strict quarantine restrictions.

“Over the next five years, the annual rate of GDP growth is set to rise to an average of 6.7%. However, between 2026 and 2035, CEBR forecasts that the average rate of GDP growth will dip slightly to 6.5% per year,” the CEBR said.

The WELT report this year made some adjustments, as the study released by the center last year had said that the Philippines would reach the 22nd spot by 2034. The report said then that the country would be one of the most rapidly growing of the larger economies measured in the study, which looked at 193 countries.

The CEBR estimated the pandemic’s impact on global GDP is $6 trillion.

“We believe the longer-term hit will be smaller — falling to about $1 trillion by 2034,” it said.

Although CEBR is optimistic the availability of COVID-19 vaccines will further loosen economic constraints, it also acknowledges some long-term negative effects in many countries.

“We believe that the scarring to the world economy will affect the trade-off between growth and inflation and so predict an economic cycle in the early to mid-2020s as inflation caused by the hit to the supply side from COVID-19 works its way through,” the center said.

CEBR expects China to overtake the United States as the world’s largest economy by 2028, five years earlier than projected previously. CEBR attributed this to China’s management of the virus and the hit to long-term growth among Western economies. — Jenina P. Ibañez