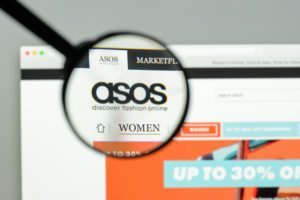 The rapid shift to online shopping during the pandemic has prompted Asos to raise its profit guidance for the year despite warning that it will face an extra £15 million hit from Brexit tariff costs.

The online fashion retailer said that its sales had “surpassed expectations” as it handled 2,000 orders a minute on Black Friday, which coincided with November’s lockdown so shoppers had to switch online for discounts.

The group said that it had benefited from the closure of store-based rivals, with its sales in the UK rising by 36 per cent, twice the previous year’s rate, to £554.1million and total group sales increasing by 24 per cent to £1.36 billion.

Asos said that although it was cautious about coronavirus and the “likely economic impact on our core twentysomething consumer”, it expects pre-tax profits for 2021 to be at the top end of market expectations. This translates to about £170 million, compared with consensus estimates of £141 million, analysts at Berenberg said.

Nick Beighton, 52, chief executive, said: “Our cautious outlook for the second half of the year remains unchanged. However, the strength of our performance gives us confidence in our continued progress towards capturing the global opportunity ahead.”

Shares in Asos rose by 2 per cent to £53 on the back of the bullish upgrade. The company, which is listed on the junior Aim market despite its £5.35 billion valuation, was founded by Nick Robertson in 2000 as As Seen On Screen. Its growth has soared as it has expanded internationally and attracted young shoppers, who have turned their back on the high street in favour of online retailers that respond faster to social-media influenced trends.

While retailers have seen a decline in demand for party dresses, sequins and high heels because social events have been cancelled, Asos has responded by switching its ranges and is selling more exercise clothes, loungewear and cosmetics. It said that although the profit margins on these items were smaller, the rate of returns was significantly lower because people typically buy one size of T-shirt and keep it, whereas they might order multiple sizes and styles of dresses and send back the ones that don’t fit. As restrictions have tightened, people have also become less likely to go out to send back their unwanted items, and so return rates have fallen further.

As a result Asos says that it expects a net Covid pre-tax profit benefit of at least £40 million from the resumption of “lower return rates driven by renewed social restrictions in the period”. Its rival Next also highlighted lower return rates during the lockdowns as a boost to its business this month.

Asos warned that it would face £15 million of Brexit tariff costs this year related to country of origin rules, even though it has invested in a warehouse in Berlin and a sophisticated logistics operation. Fashion retailers are only just digesting the complexity of the new rules, which mean that they face tariffs of about 12 per cent when goods are re-exported from the UK.

The company said it would absorb the extra cost to European customers but that there would be a tariff hit for transferring goods from the UK to its European warehouse, including those products it sells on behalf of British brands such as River Island and Oasis. The group will start asking overseas factories to split orders and ship directly to Europe to minimise costs.