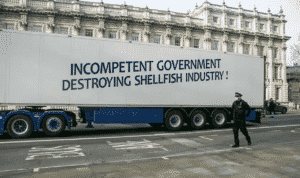 Fishing lorries from Scotland and Devon have descended on Westminster to stage a protest against the Brexit red tape they say is either delaying or ruining exports of their fresh shellfish to the EU.

Trucks with slogans including “Brexit carnage” and “Incompetent government destroying shellfish industry” parked metres from Downing Street on Monday, but they stopped short of carrying out their threat last week to dump fresh fish close to No 10.

“We strongly feel the system could potentially collapse,” said Gary Hodgson, a director of Venture Seafoods, which exports live and processed crabs and lobsters to the EU.

“Boris Johnson needs to be honest with us, with himself and with the British public about the problems for the industry,” he told Reuters.

David Rosie at DR Collin & Son, which employs 200 people, used to send one or two lorries a night to France carrying live crab, lobster and langoustine worth about £150,000.

He said he had not exported a single box this year. Fishers, he said, “lost their livelihoods in the turn of a clock” when Britain left the EU’s orbit on New Year’s Eve.

Johnson has said he “understands the frustrations” of businesses exporting to Europe and pledged that any business experiencing difficulty exporting to the EU “through no fault of their own” would be compensated from a £23m fund that was being set up.

He claimed that one of the current problems impacting exports of fish was Covid curbs.

“Unfortunately, the demand in restaurants on the continent for UK fish has not been what it was before the pandemic,” Johnson told Sky News.

Exports of fresh fish and seafood have been severely disrupted by delays since the UK’s transition period ended on 31 December with full customs declarations, guarantees over rules of origin and health certificates required for every consignment.

Food exporters have been hit badly as they also require a health certificate.

In addition, any haulier with a mixed load, or “groupage”, can be held up if just one box on the trailer does not have the right paperwork.

The resulting red tape from Brexit has prompted some importers to pay extra for empty trucks to cross the Channel in order to guarantee supplies can get into the country, one EU logistics company said.

The company, which did not want to be named, said it had about 50 trucks delivering cargo every week from the EU to the UK, but they were returning empty as importers in key industries such as the motor sector were willing to cough up to ensure smooth passage.

“Companies are willing to pay the price for the trucks to go back empty because it’s cheaper than being stuck in a lorry park for four or five days,” said the source.

“We charge €400 to €600 a day, so it’s cheaper for companies to pay for the trailer to go back empty and then get another delivery back into the truck. It’s stupid at the end of the day but that is Brexit.

“If they have a delivery coming from Belgium or Germany they would prefer the truck to go back and get a second or third delivery,” they added.

“The UK is already the laughing stock of Europe with Brexit, but I have to say, and I don’t enjoy saying this, we are making a lot of money out of it,” said the source.

The Haulage Association has said “something has to give” over the behind-the-scenes chaos.

“The government is dodging bullet after bullet. If it were not for Covid this is a disaster that would be on the front page every day,” said Rod McKenzie, policy director.

Even with the correct paperwork one driver claimed he was issued with an on-the-spot £300 fine because it had taken so long for customs paperwork to be checked as his 24-hour “Kent access permit”, required for all international truck drivers crossing the Channel, had expired.

The Department for Transport said that if a driver’s Permit has expired, they should get a new one free of charge at on the government’s website.