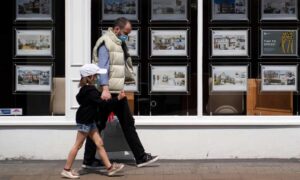 Housing market transactions last month reached their highest level since 2006 as buyers raced to benefit from the stamp duty holiday.

Overall transactions last year fell by 11 per cent to about one million, holding up relatively strongly despite the economic uncertainty caused by Covid-19 and the eight-week shutdown of the market as the pandemic hit. During the global financial crisis in 2008, annual transactions fell by 43 per cent.

The stamp duty holiday, introduced in July, helped to fuel a boom in the housing market in the summer and autumn. It raised the threshold at which buyers start to pay the tax from £125,000 to £500,000 Critics have claimed that it was introduced before there was enough evidence that the market needed it, contributing to house prices rising at their fastest rate in six years. They are up by more than the maximum saving of £15,000 in 27 of London’s 32 boroughs since it was introduced, according to Twindig, the property portal.

Rishi Sunak is facing calls to extend the relief in April, when unemployment is set to rise as the furlough scheme ends. Lucian Cook, head of residential research at Savills, the estate agency, said: “With the current lockdown causing further economic disruption and making it more difficult for some buyers to complete before the stamp duty holiday ends, arguably there is a stronger case to extend it and taper its withdrawal than there was for introducing it in the first place.”

The Bank of England’s credit conditions survey found that strong demand had allowed banks to maintain strict standards in the final three months of last year, while increasing mortgage lending. Mortgage availability is expected to increase in the next three months and the cost of mortgages is forecast to fall.

Anthony Codling, the housing analyst who founded Twindig, said: “It suggests that lenders are less fearful about a housing market crash.”

Last year the top end of London’s market was at its strongest since 2016. The number of homes sold for more than £5 million was up 12.3 per cent on the previous year to 348, Savills said.