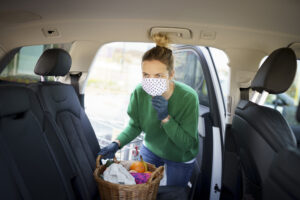 Everyone in England who tests positive for coronavirus could be given £500 to ensure they self-isolate under plans to stop hardship spreading the virus.

Ministers are trying to solve a problem that scientific advisers have long said is an obstacle to controlling the virus. Paying all those with a positive test could cost £2 billion a month. However, the payment could be limited to those who cannot work from home.

Ministers are due to discuss the issue next week but an overhaul of financial support seems imminent. The present payments system has been blamed for prolonging the pandemic by forcing infectious people to go to work.

Police could also be given access to health data to enforce quarantine under the proposals, which are dated January 19, and were seen by The Guardian.

Cabinet Office surveys suggest that only 17 per cent of people with symptoms are coming forward for testing, and the government document says: “Wanting to avoid self-isolation is now the single biggest reported barrier to requesting a test.” Only one in four people self-isolates for the full ten days and 15 per cent carry on going to work, according to figures in the paper.

Government surveys stretching back to last summer have found low levels of adherence to self-isolation, with financial hardship and caring responsibilities consistently cited.

Matt Hancock, the health secretary, is said to favour the most comprehensive option of payments to all those who test positive, costing up to £453 million a week. Limiting payments to those who cannot work from home would halve the cost. Restricting them to lower earners would cost just over £100 million a week.

Under the present system low earners receiving certain benefits are eligible for £500 payments if they test positive or are told to isolate as a contact. Those who do not qualify for this payment can ask councils for discretionary £500 grants, but the £15 million pot for the scheme began running out last month. Figures this week showed three quarters of applications were being rejected.

Robert West, professor of health psychology at University College London and a member of the government’s Spi-B behavioural advisory group, said that throughout the pandemic only 20 to 30 per cent of symptomatic people had fully quarantined. “If you look at the countries that have been successful in controlling the virus, they have made it so that people are financially able to self-isolate,” he said.

However, Duncan Robertson, of Loughborough University’s School of Business and Economics, warned: “We need to ensure that people are incentivised to come forward for a test, to self-isolate if that test is positive, and not to become infected to collect the bounty.”

A Department of Health spokeswoman said: “All local authorities’ costs for administering the Test and Trace Support Payment scheme are covered by the government, and each authority is empowered to make discretionary payments outside of the scheme.”