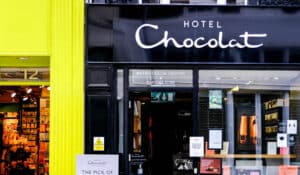 The Cambridgeshire-based company said it had achieved sales growth in the UK as well as in its key new markets – Japan and the US – even while stores and cafes were closed for much of the year.

Online sales more than tripled as Angus Thirlwell, the chief executive and co-founder, said the company had “found ways to keep the Chocolat flowing”.

He said the firm had doubled its distribution system in St Neots to help drive growth through partners including Amazon, Ocado and John Lewis, as well as its own website.

The company added 600,000 new online customers in the UK and now plans to open three new outlets, including one in Edinburgh, as well as reopening all existing sites.

Sales in the US rose 47% in October, although stock shortages held back growth in December. In Japan, sales more than tripled as Hotel Chocolat opened 11 new outlets with its joint-venture partner, taking the total to 19.

Thirlwell said stores in smaller community locations such as Harrogate, in Yorkshire, and Hitchin, in Hertfordshire, had fared well when they had been allowed to open – as more people were exploring their locality while working from home. He said things had proved tougher in city centres. “A number of locations are going to take a while to come back but we are in it for the long run,” he said.

The group is taking on 130 new staff – in a variety of roles from data analysis to engineers and store staff. Thirlwell said he did not expect to pay back business rates relief and furlough pay for store staff while stores had to be shut.

“The intention of the government support was to prevent knee jerk redundancies to help businesses keep growing. We are UK-based and pay all taxes here and are hoping to keep paying lots more as we grow and recruit more people,” he said.

Secrets of Success: Sanjay Wadhwani, founder and CEO of MetaFrames

One in five employees expect to change jobs this year