THE Philippines dropped out of the top 10 in a list of countries that are considered attractive destinations for technology, digital and innovation, and business process management, after seeing a decline in the workforce population amid the pandemic.

From fifth place in 2020, the Philippines now ranks 18th in the Top 50 Digital Nations, according to the latest Tholons Global Innovation Index. 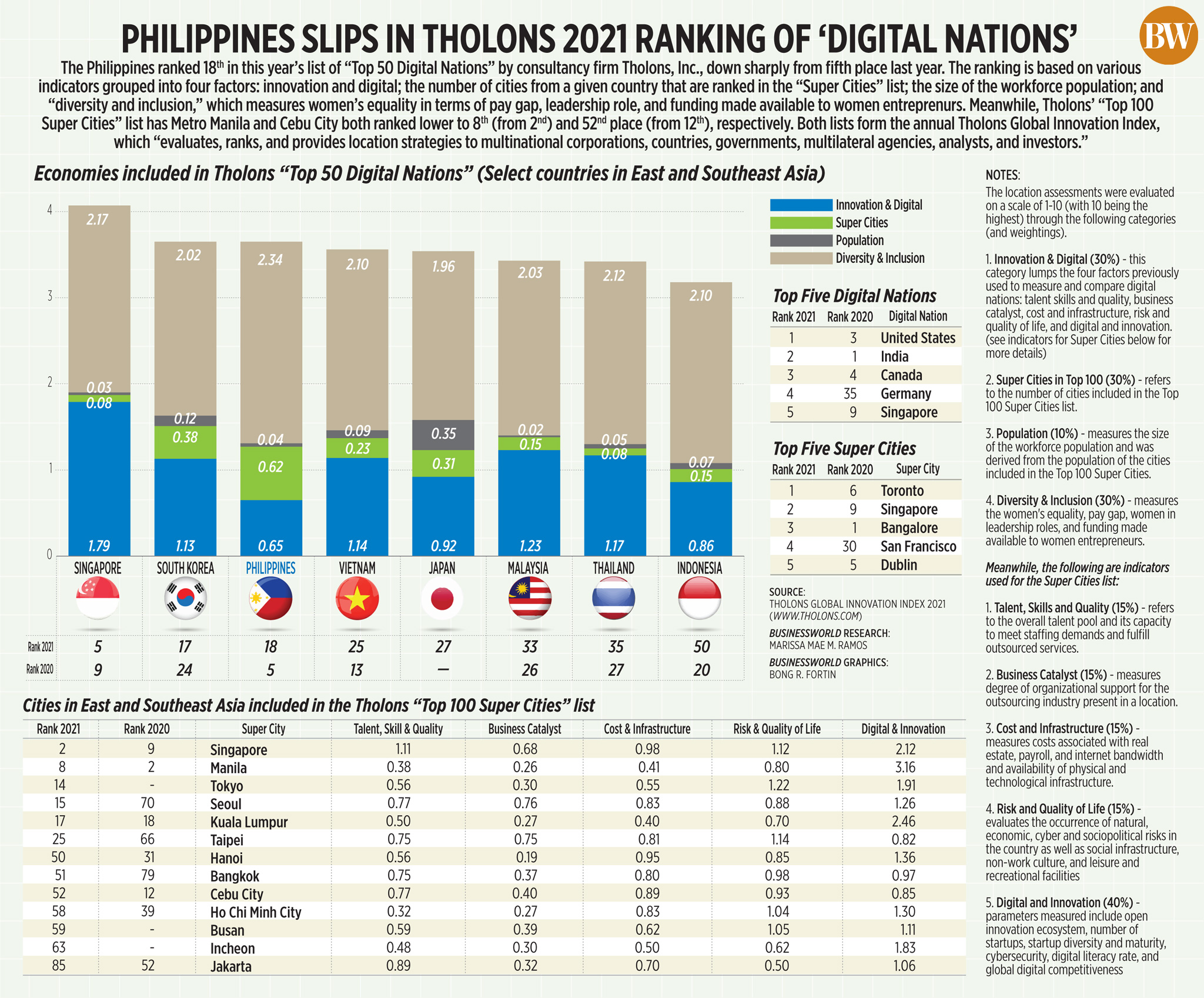 The Philippines also scored 2.34 in the diversity and inclusion area, a new indicator in this index that assesses nations in terms of women’s equality, pay gap, women in leadership roles, and funding made available to women entrepreneurs. This was among the highest scores for this area globally.

It should be noted, however, Tholons increased its emphasis on digital factors in this year’s index to 40% from 25% last year, when it attributed traditional factors with 75% weightage.

The United States bounced back to the top spot on the innovation index, from third place in 2020. India slipped to second place from last year’s top ranking, followed by Canada (third from fourth), Germany (fourth from 35th), and Singapore (fifth from ninth).

“Organizations will need more active engagement strategies, if they want to thrive and succeed,” Tholons, a global strategic consulting, digital innovation and investment advisory group, said in the report.

“Leading businesses are adopting ‘human-AI’ collaboration. As social distancing becomes the norm, in many industries, robots are transitioning faster than expected from regulated environments to unregulated environments. Corporations and governments are looking for more and newer ‘contact-less’ solutions,” it added.

Sought for comment, Terry L. Ridon, convenor of InfraWatch PH, said via e-mail: “We have serious concerns on the methodology of the Tholons index, in which we are seeing downward trends of 95% on workforce population, 66% in talent, skill and quality indicators, 72% in business catalyst, 62% in cost and infrastructure, and 84% in innovation and capital.”

“Outside of the coronavirus crisis, there is nothing substantially different from the previous year on Filipino talent, business environment and innovation to warrant the substantial reduction of ratings in these areas,” he added.

Mr. Ridon noted, however, that the results should be viewed as a continuing challenge to further improve the quality of the country’s workforce, especially in artificial intelligence (AI), machine learning, robotics, and biotechnology areas.

“Instead of a focus on graduates readily available for overseas deployment, such as those in the healthcare sector, higher education should also focus on training a new set of graduates who can globally compete within the country,”’ he said.

He expects Manila and Cebu to remain the main hubs for innovation and talent pool.

“But a clear nexus should be made between academe and industry to produce professionals who can provide the needed knowhow for the current zeitgeist for AI, robotics, machine learning, among others,” Mr. Ridon explained. “The government, through the Commission on Higher Education, plays a major role in defining this nexus.”

For his part, Claro dG. Cordero, Jr., director and head of research at Cushman & Wakefield, said the Philippines is exhibiting the challenges of “mature/traditional markets, made more complicated by the ongoing pandemic.”

To address concerns over its workforce population, he said the Philippines should step up its efforts to further expand the talent pool by attracting labor that can adapt to more digital enhancements in the industry.

On the decline of Manila and Cebu’s rankings, Mr. Cordero noted the imbalance between demand and supply in business process outsourcing and technology innovation needs to be addressed for the cities to regain their competitiveness.

“There needs to be a specific focus on sourcing skilled labor to address substantial reduction in training overheads and increasing complexity of the roles within the BPO sector,” Mr. Cordero explained.

“There should also be more diversity in skill enhancements, such that — while the majority of demand for BPO services is still being driven largely by English-speaking industrialized countries, there is an increasing demand for multilingual operators who can serve different marketplaces. Cebu and Manila, being the biggest BPO markets locally, need to continually work with its neighboring areas and provinces to ensure strategic hiring practices and to harness a consistent regulatory environment,” he added.