FOREIGN direct investments (FDI) to the Philippines slid to a five-year low in 2020, as the coronavirus pandemic drove investors toward safe havens.

This is the lowest since the $5.63 billion in FDI inflows seen in 2015, but exceeded the $6-billion full-year projection made by the BSP.

“The disruptive impact of the pandemic on global supply chains and the weak business outlook adversely affected investor decisions in 2020,” the central bank said in a statement.

FDI inflows dropped for the second straight year. In 2019, investor sentiment was affected by the US-China trade war, regulatory risks in the country, and lack of clarity in tax reforms.

“FDI flows slowed as the Philippines may no longer be as bright an investor destination given our fast fading economic prospects while investors are also likely holding on to cash to ride out the storm,” ING Bank N.V. Manila Senior Economist Nicholas Antonio T. Mapa said in an e-mail.

“The year-on-year decline in FDI in December 2020 was due mainly to base effects given significantly large inflows from net investments in equity capital and debt instruments in 2019,” the BSP said.

Equity other than reinvestment of earnings dropped by 89.8% to $78 million in December, as placements plummeted 87.8% to $97 million while withdrawals dropped 42.9% to $20 million.

The bulk of the equity capital placements came from Japan, the Netherlands, the United States, and Singapore, the central bank said. The funds flowed into the manufacturing, real estate, and the financial and insurance industries.

Investments in equity and fund shares likewise fell by 82.2% to $149 million in December, while inflows to debt instruments went down by 31.1% to $360 million.

Reinvestment of earnings declined 2.6% to $71 million in December.

However, Mr. Mapa warned that the pandemic will continue to dampen the outlook for foreign investments.

“Getting the economy back on track will be the only strategy to increase our attractiveness as a destination once more while also quelling the ongoing pandemic,” he said.

“My guess is that digital-based and essential investments will lead the way and investments heavy on human and face-to-face interactions may be laggards,” he said in an e-mail.

Mr. Asuncion said attractiveness of emerging markets like the Philippines to FDI inflows will depend on the pace of vaccine rollouts.

CREATE, which will immediately slash the corporate income tax to 25% from 30%, has already been ratified by Congress in February and is already awaiting Mr. Duterte’s signature.

For Mr. Mapa, this may not be enough to boost investor confidence in the Philippines.

“Recent legislation to lower corporate taxes and rationalize fiscal incentives will help but that only assumes that the Philippine economy is back on its feet and that the virus has been quelled or at least contained,” he said. 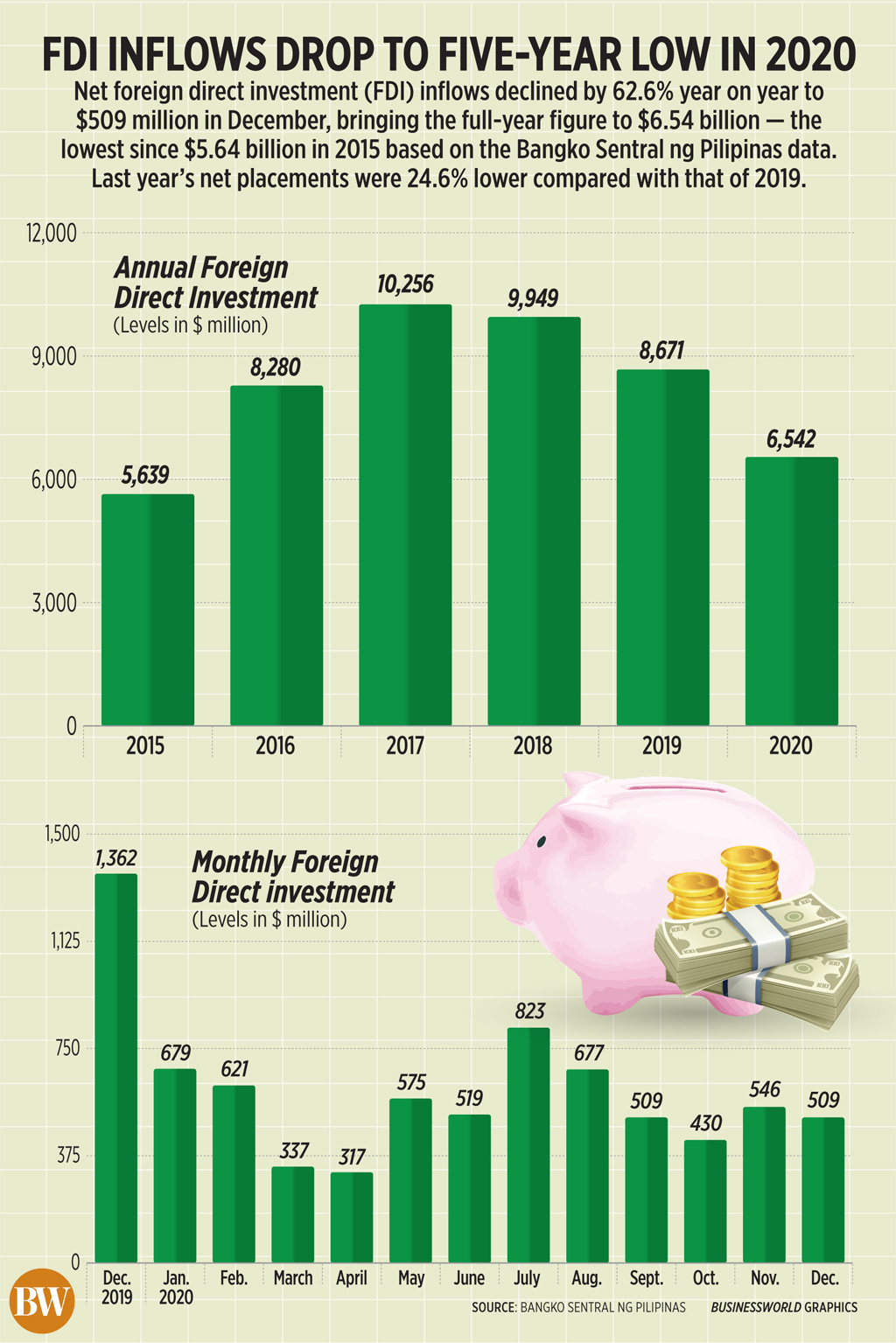