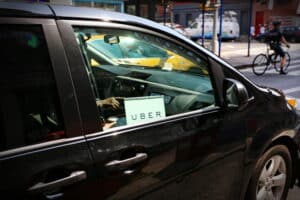 Uber is to guarantee its 70,000 UK drivers a minimum hourly wage, holiday pay and pensions after a landmark supreme court ruling.

The ride-hailing app said drivers would start benefiting from the changes from Wednesday while retaining the right to choose when they work, as it accepted they were classed as workers in line with the ruling.

Uber, like many delivery and courier companies, has argued that its drivers are independent self-employed “partners” not entitled to basic rights enjoyed by workers, which include the legally enforceable minimum hourly wage and a workplace pension.

Last month the UK supreme court dismissed Uber’s appeal against a 2016 landmark employment tribunal ruling that its drivers should be classed as workers.

The company has previously argued that the ruling applied to only a small number involved directly in the case and that it is not obliged to apply its findings to its other drivers.

On Tuesday night the company made a dramatic U-turn, saying drivers would get at least the legal minimum wage, after expenses and holiday time at 12.07% of earnings, paid out on a fortnightly basis. They will also be automatically enrolled in a company pension plan with contributions from Uber alongside their own. Drivers will continue to have access to free insurance in case of sickness or injury as well as parental payments, which have been in place for all drivers since 2018.

Jamie Heywood, Uber’s regional general manager for northern and eastern Europe, said: “This is an important day for drivers in the UK.”

Recognising that its move was likely to put pressure on other gig economy firms to change tack, Heywood added: “Uber is just one part of a larger private-hire industry, so we hope that all other operators will join us in improving the quality of work for these important workers who are an essential part of our everyday lives.”

Unions and drivers welcomed the decision. Mick Rix, national officer of the GMB union, said: “Other gig economy companies should take note – this is the end of the road for bogus self-employment.

“Uber had to be dragged kicking and screaming to do the right thing, but finally they’ve agreed to follow the ruling of the courts and treat their drivers as workers.

“It’s a shame it took GMB winning four court battles to make them see sense, but we got there in the end and ultimately that’s a big win for our members.”

The TUC general secretary, Frances O’Grady, said the move “appears to be a big step in the right direction”. “Now the company must recognise trade unions. The TUC stands ready to host talks with Uber and private hire unions to begin that process.”

However, the App Drivers & Couriers Union headed by James Farrar and Yaseen Aslam, lead claimants in the successful Uber tribunal case, said that drivers were still being short-changed.

“While we welcome Uber’s decision to finally commit to paying minimum wage, holiday pay and pensions we observe that they have arrived to the table with this offer a day late and a dollar short, literally.”

They said that Uber had said minimum wage and holiday pay would accrue from when a trip was accepted to when a passenger was dropped off, not the whole time drivers were logged on to its app – the working time laid out by the supreme court. They said this meant that Uber drivers could miss out on up to 50% of potential earnings.