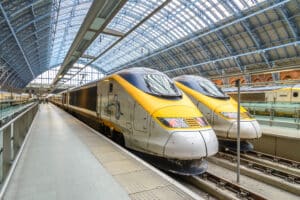 Jean-Pierre Farandou, chief executive of France’s state-owned rail provider SNCF, claimed the cross-Channel train operator is at risk of bankruptcy after passenger numbers slumped by 95 percent during the pandemic.

Speaking to the FT Farandou said : “We are getting closer to the moment when Eurostar have real cash flow problems… by next month, we have to conclude these discussions.” The Channel Tunnel train firm has been in negotiations with the British and French governments over a state-backed bailout.

Eurostar bosses announced in January they were on course for collapse after failing to find new funding.

They are now in talks with UK Export Finance in the hope of securing loans worth £60 million.

Industry sources have previously warned Eurostar risks running out of cash as early as April, but could cling on to the start of summer if it maintains a skeleton service.

Mr Farandou added: “We hope that it will be weeks because the financial situation is going to be very difficult at the end of May, start of June.”

Britain flogged its 40 percent share to a host of private companies for £757 million in 2015 by the Government in order to pay off its debts.

The Treasury has been reluctant to bailout Eurostar despite holding numerous talks with the firm.

Transport Secretary Grant Shapps, in February, suggested it was for the French to rescue it, adding: “It’s not our company.”

Mr Farandou said: “Eurostar is even more important after Brexit. It’s worth the cost of fighting for Eurostar. Eurostar is strategic, it’s geopolitical.”

The Frenchman said shareholders’ aid was “finite” after they pumped in more than £170 million to keep the service afloat during the pandemic.

It has been reported that as much as £80 million in British taxpayers’ cash could be on the line if Eurostar, which has its headquarters in London, collapses.

The Treasury is essentially responsible for the costs to run the 67-mile stretch of high-speed track between London St Pancras and the Channel Tunnel.

Business groups have already pleaded with Chancellor Rishi Sunak and Mr Shapps in a bid to keep the service afloat.

In January, executives from 28 firms wrote: “Safeguarding the future of this connection to the Continent should be a symbol of both our desire to build back better and our new cooperative relationship with our European neighbours.

“If this viable business is allowed to fall between the cracks of support – our recovery could be damaged.”