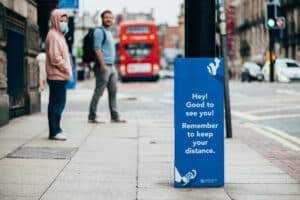 The flash IHS Markit/CIPS UK composite purchasing managers’ index rose from 49.6 to 56.66 — considerably higher than the 51.1 forecast. Chris Williamson, chief business economist at IHS Markit, said: “The surge in business activity is far stronger than any economist expected and hints at only a modest contraction of GDP during the first quarter, adding to evidence that the economy has shown far greater resilience in the third lockdown compared to the first.”

The economy shrank by 10 per cent last year after collapsing by almost a fifth in April, the first full month of lockdown. Although the country went into a third nationwide lockdown in January, the economy shrank just 2.9 per cent as businesses adapted to social distancing. Analysts said that the economy is likely to contract by just 1.6 per cent in the first quarter.

Samuel Tombs, economist at Pantheon Macroeconomics, said: “Business confidence is running high now that the vaccine programme is well advanced and lockdown easing is in sight. As a result, we judge that GDP rose by about 1 per cent month-to-month in February, followed by a 2 per cent increase in March.”

Service sector companies continued to face the brunt of the lockdown but they recorded considerable growth in March. The PMI for the sector rose to a seven-month high of 56.8 from 49.5 last month.

The manufacturing PMI rose from 55.1 to a three-year high of 57.9 as factory output and new orders rose sharply. IHS Markit said businesses were being constrained by capacity pressures, supply shortages and customs delays.

“An imbalance of demand and supply pushed up raw material costs, with efforts to protect margins leading to the steepest increase in factory gate charges since January 2017,” the report said.