No vaccine no pint: Pubs to bar entry to not been vaccinated 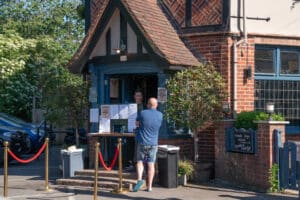 Pub landlords will be able to bar entry to people who have not been vaccinated, Boris Johnson has suggested.

The prime minister said it “may be up to the landlord” to decide whether to require proof that customers are not infectious. This marks a significant change of approach from last month, when he ruled out the idea.

The prospect of “papers for the pub” has already prompted strong criticism from some Tory backbenchers, who warned that it could lead to landlords disproportionately turning away people from ethnic minorities whose vaccine uptake has been lower. Officials insist this will not happen and that people will be able to show a recent negative test as an alternative to proof of vaccination.

Outdoor hospitality is due to reopen next month, and Johnson’s plan to ease restrictions appears to be on track: internal government estimates project deaths falling to below 20 a day and Covid hospital patients halving in the next fortnight.

A month ago Johnson appeared to rule out domestic Covid checks, pouring scorn on the idea of “vaccination passports to allow you to go to the pub”. Michael Gove, the Cabinet Office minister, is leading a review of the idea, expected to end in May, and government sources said it was likely that certification would be introduced in some form.

Ministers believe that businesses will welcome an official framework on such checks if they are given discretion on how they should be applied.

The hospitality industry is strongly opposed to compulsory certification, but some in government think coronavirus checks may be the only way businesses such as nightclubs will be able to open this summer. One source said many pubs would face a choice between being half full with social-distancing measures in place and using certificates so they could open at full capacity. It is unclear how long such a system would be required.

Appearing before the Commons liaison committee, Johnson said yesterday that “the basic concept of vaccine certification should not be totally alien to us”, giving the strongest suggestion yet of compulsory vaccination for care workers.

He backed care home managers who insisted on staff taking the vaccine. “This is a particularly contagious disease; it can be very nasty indeed,” he said. “We’ve seen what happened in care homes. It doesn’t seem to me to be irresponsible at all — far from it, wholly responsible — for care home companies to think of requiring vaccination.”

Asked what this meant for businesses such as pubs demanding proof of vaccination, he said: “That may be up to the individual publicans — it may be up to the landlord.” Pressed on whether this approach went against his liberal instincts, Johnson said that he had been “thinking very, very deeply” about the issue. “My impression is that there is a huge wisdom in the public’s feeling about this. People instinctively recognise when something is dangerous to them, and they can see that Covid is collectively a threat, and they want us as their government, and me as the prime minister, to take all the actions I can to protect them.”

Work is under way to convert the NHS app into a digital certificate showing proof of vaccination or a negative test. Officials are still considering whether results from tests conducted at home will be acceptable or whether people will be required to visit a supervised centre. Kate Nicholls, chief executive of UKHospitality, said compulsory certification would be “unworkable; would cause conflict between staff and customers and almost certainly result in breaches of equality rules”.

Greg Mulholland, of the Campaign for Pubs, said it was “unfair and absurd” to ask pubs to police customers. “Table service already means pubs having to take on more staff, despite less trade, so to have to take on door staff to check people’s vaccination history would be simply unviable, as well as alienating customers,” he said.

One senior hospitality industry figure said pubs were fairly relaxed about a voluntary scheme. “Provided they have a choice, most publicans won’t mind if there is a scheme, but I don’t expect many would choose to implement one. There would be significant costs involved, and it would not be fair on younger people if they have not yet had their vaccines. If it was to be made compulsory, then you might see an angry reaction.”

Steve Baker, deputy chairman of the lockdown-sceptic Covid Recovery Group of MPs, said Johnson was on a “dangerous path” that would result in a “two-tier Britain”. He warned of “businesses turning away customers from communities which have shown an unfortunate hesitancy to take up the offer of a vaccine”. He added: “We must not fall into this ghastly trap.”

Read more:
No vaccine no pint: Pubs to bar entry to not been vaccinated