Government accused of playing games over switch to electric motoring 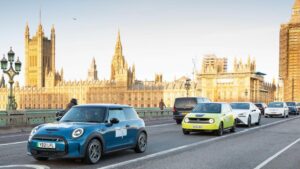 The motor industry has accused the prime minister and chancellor of indulging in “a game of snakes and ladders” by setting ambitious targets for the electric car revolution but then withdrawing support.

At a summit of leading figures involved in the decarbonisation of the British automotive sector, Mike Hawes, chief executive of the Society of Motor Manufacturers and Traders, the industry body, listed several letdowns by the government and questioned whether it had “a strategy not just a soundbite”.

He questioned why Boris Johnson had declared the end for sales of cars with internal combustion engines by 2030, only for Rishi Sunak in the budget to cut plug-in car incentives. Hawes said that the government had promised support for the installation of rapid electric car charging points on major roads, but then had cut grants for re-charging facilities in people’s homes.

Similarly, he said, the government had promised funding for “automotive industrial transformation”, yet had abolished the Go Ultra Low campaign to get people to buy zero-emission vehicles and had done nothing in the budget to support investment in infrastructure.

“Government seems . . . to have lost sight of one vital player — the consumer,” Hawes said. “We will only succeed if the consumer thinks [electric vehicles] are affordable, convenient and the right choice for them. This means giving people the incentives to buy them and the infrastructure to charge them. Both are lacking.”

Jonathan Goodman, UK chief executive of Polestar, Volvo’s electric car brand, said that the axing of the £3,000 plug-in grant incentive for all zero-emission cars worth more than £35,000 and its reduction to £2,500 for cheaper models was “arbitrary”. He added: “What is more important is the lack of consistency.”

Andreas Krüger, of Volkswagen, said that Britain was lagging behind countries such as the Netherlands and Norway in its provision of recharging infrastructure. “We need a clear route on charging points in cities and high-speed charging on highways,” he said.

The SMMT said that its research showed that these factors were having an impact on whether British motorists were ready to embrace electric driving. It said that almost half of drivers did not believe that they would be ready to drive an electric vehicle by 2030 because of the cost of buying a vehicle and a lack of charging infrastructure.

With plug-ins now accounting for one in eight of all new registrations, the SMMT said that if the country was to catch up, it needed to be installing 700 plug-in points a day, compared with 42 at present.

In cities with little off-street parking there was a dire shortage, it said. The 7,000 public charging points in London equate to one for every 1,300 people. Wales, with a population of three million people, has only 846 charging points. For Northern Ireland’s two million residents, there are 325.

Hawes said that the charging point infrastructure providers — a collection of energy companies and new entrants — were not helping the case. “In the UK, one in ten of existing charging points doesn’t work,” he said. “In the Netherlands fewer than one in a hundred charging points is defective. “