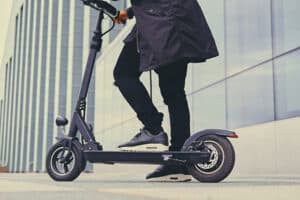 The government was accused of being reckless over the regulation of electric scooters yesterday after it was disclosed that a decision on legalising their use will be delayed by up to 12 months.

Ministers are unlikely to rule on the future of the devices until the middle of next year because of the delayed launch of a public trial in London.

One manufacturer said that the move could lead to a rise in the number of unregulated and “out-of-control” e-scooters on the streets.

There is growing concern about the proliferation of battery-powered scooters. Figures published last week showed they had been used in hundreds of crimes including robberies and assaults.

Last year the Department for Transport (DfT) fast-tracked secondary legislation, permitting the use of e-scooters in the UK for the first time. They are already legal in every other major European country. The rules, which came into force in early July, allow only the use of scooters hired from designated licensed operators, ensuring they meet certain safety requirements. They are limited to a top speed of 15.5mph and are permitted only on roads and cycle lanes, not pavements.

Trials have so far begun in 50 towns and cities including Birmingham, Liverpool, Newcastle, Bristol, Oxford, Cambridge and Southampton. Privately owned e-scooters, which are widely available to buy online, are still illegal on public roads and pavements although it does not stop tens of thousands of them being used every day.

The government said that the trials were supposed to run for 12 months, with the last ones finishing by the end of August before a decision was made on the future of the technology. Ministers could then opt for full legalisation — allowing privately owned e-scooters to be legally used for the first time — or permit only those rented from licensed operators.

However, the DfT said that the trials were now being extended until the end of March next year. It means that a decision on the long-term legal position is unlikely to be taken until next spring at the earliest, with the possible legalisation then delayed until mid-2023.

Richard Adey, the chief executive of Taur, a London-based manufacturer of e-scooters, said that the government’s “dithering and delay has allowed more and more unregulated and out-of-control scooters to proliferate on streets, risking the life and limb of pedestrians and other road users”.

He added: “It is hard to imagine a more frustrating, confusing and reckless policy, which could be sorted out by passing a simple piece of legislation to legalise and regulate e-scooters.”

The DfT said: “To ensure we get the most comprehensive evidence from trials, including those that have started more recently, the end date for trials has been extended to 31 March 2022.”

Last year the Commons transport committee called for the devices to be fully legalised — bringing the UK into line with other European countries — provided this was backed by a “sensible and proportionate regulatory framework”.

However, the move is opposed by groups which warn that e-scooters pose a deadly risk to pedestrians, particularly those with mobility or sight problems. The National Federation of the Blind has branded them unsafe.

Campaigning in the time of COVID

Does your business deserve a Champions in a Crisis Award?

When a multifaceted language is reduced to what you see onscreen