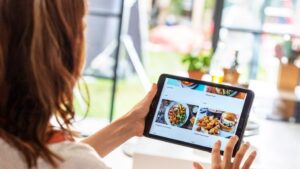 Meal kit delivery firm HelloFresh has seen a big jump in customer numbers as it continues to benefit from the trend of ordering food online seen during the pandemic.

Its kits come with pre-packaged fresh ingredients and cooking instructions.

But it has faced criticism over order delays and cancellations as it has struggled to meet demand.

HelloFresh said was “confident” it would continue to benefit from the shift to online grocery shopping.

The German firm, which operates across Europe, the US and New Zealand, said it was is seeing a similar rise in demand that food delivery services and supermarkets had seen during the coronavirus pandemic.

Revenues for the January-to-March period more than doubled from a year earlier to €1.44bn (£1.25bn).

The firm said that, just as consumers have been “adapting to new habits” such as online shopping, they have become more interested in using meal kits, rather than buying separate ingredients from supermarkets.

One of its rivals in the UK market, Pasta Evangelists, has estimated its sales increased by more than 300% in 2020.

“2021 has set off to a strong start,” said HelloFresh’s co-founder and chief executive, Dominik Richter.

“I am confident that we will benefit disproportionately from the shift to increased online grocery penetration.”

Mr Richter said the firm had continued to grow despite experiencing bottlenecks in its capacity to produce the meal kits “over the majority of 2020”, particularly in its US market, which currently contributes more than half of its total revenues.

Last year UK customers reported problems including orders being cancelled at the last minute, missing boxes, and missing ingredients in their boxes as the firm struggled to keep up with demand.

Since January, the firm has set up two new distribution centres in Texas and Georgia, as well as acquiring US ready-to-eat meal company Factor75.