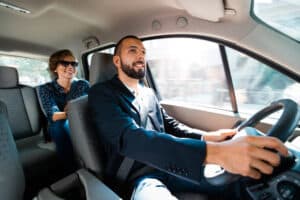 Revenues at Uber have fallen by a tenth after the company set aside $600 million to resolve historical claims with UK drivers.

The ride-hailing group announced in March that 70,000 drivers in the UK would be classed as workers, entitled to the minimum wage and holiday pay, after the Supreme Court ruled that it was wrong to class its drivers as independent contractors.

While the company had previously argued that its drivers were self-employed, the Supreme Court said that they were in a “position of subordination and dependency” to the company.

Reopened restaurants across the United States did not dent demand for Uber’s food delivery service, which posted revenue of $1.74 billion, up 230 per cent year-on-year and 28 per cent on a quarterly basis. America’s accelerating recovery has yet to provide a significant boost to ride bookings at Uber, which remained broadly flat compared with the previous quarter.

Founded in 2009 in San Francisco, Uber is best known for its taxi-hailing app, which before the pandemic facilitated 21 million trips each day. The company, which listed in May 2019, has a market value of $96 billion. Its shares fell 4 per cent, or $2.13, to $49.05 in late trading last night.

Uber’s total revenue fell by 11 per cent to $2.9 billion. Net losses attributable to Uber narrowed from $2.9 billion to $108 million.

Sales within its mobility unit, which it said were “reduced by a $600 million accrual made for the resolution of historical claims in the UK relating to the classification of drivers”, fell by almost two thirds to $853 million. Stripping out the UK charge, the division’s sales declined by 41 per cent to $1.45 billion.

Dara Khosrowshahi, chief executive, said: “Uber is starting to fire on all cylinders, as more consumers are riding with us again while continuing to use our expanding delivery offerings.

“We will continue to innovate and find new ways to deepen engagement with our customers.”