Boris Johnson last night signalled an end to “government edicts” on Covid and told people to start using their common sense after England recorded no deaths from the virus for the first time since last summer.

The prime minister confirmed that the biggest easing of restrictions would go ahead as planned on Monday with people allowed to hug friends and family for the first time in more than a year.

Pubs and restaurants will be able to serve inside, pupils can ditch masks in schools, theatres and cinemas can open again and hotels welcome overnight guests back. Care home residents will be able to have five visitors instead of two.

Johnson also confirmed that compulsory social distancing was likely to end next month, as reported by The Times, promising an announcement within three weeks.

Urging people not to “throw caution to the wind”, Johnson began handing risk judgments back to individuals as the government aimed to replace public health law with guidance. Four deaths were reported yesterday in Wales and none in the other three home nations, the first time this had happened in England since July 31.

Research by Public Health England showed that two doses of the Pfizer-BioNTech jab cut the risk of dying from Covid by 97 per cent, with AstraZeneca appearing as good after one dose.

The Scientific Advisory Group for Emergencies concluded that good news on vaccines meant they could be “more optimistic” that a severe third wave was unlikely as restrictions were eased.

Conservative backbenchers have been pressing the government to remove restrictions faster in response to the positive data.

Yesterday Johnson began a shift in approach, saying that he wanted ministers to stop regulating people’s lives and return to the voluntary approach on which he relied early in the pandemic. He said it was “up to all of us to exercise common sense and caution” as the government allowed people close contact with families again despite the clear risk of infection. 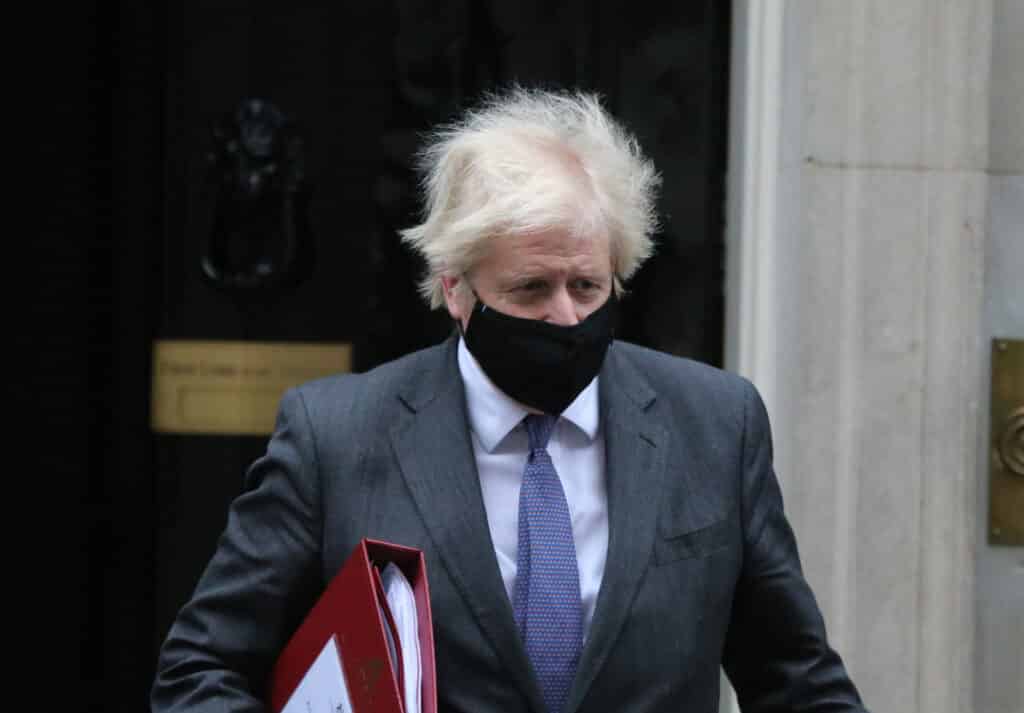 Monday’s easing would be “the single biggest step on our road map, and it will allow us to do many of the things that we’ve yearned to do for a long time”, the prime minister said at a Downing Street press conference. He added that the country was “on track to move to step four on June 21” and said ministers would detail a plan later this month to end social distancing — before the effect of next week’s easing was known.

Johnson said this update would also set out what role “if any” would be played by Covid-status certification in the resumption of mass events, with many Tory MPs uneasy about the prospect of domestic vaccine passports.

At present businesses must keep staff and customers at least a metre apart and pubs and restaurants will be limited to table service only from next week. Johnson said: “You look at the data very carefully and . . . we may be able to dispense with the one-metre-plus rule” next month. He emphasised that no decision had yet been taken.

Sir Patrick Vallance, the chief scientific adviser, said the data suggested that the government could go forward with the lockdown easing: “Everything is pointed in the direction that the vaccines are producing very effective reductions in hospitalisations and deaths.”

Mark Harper, chairman of the lockdown-sceptic Covid Recovery Group, praised Johnson for making it “clear that we will all have to learn to live with the virus”.

The prime minister said he personally would be hugging with “caution and restraint” as he told people: “We all know that close contact such as hugging is a direct way of transmitting this disease, so I urge you to think about the vulnerability of your loved ones.” 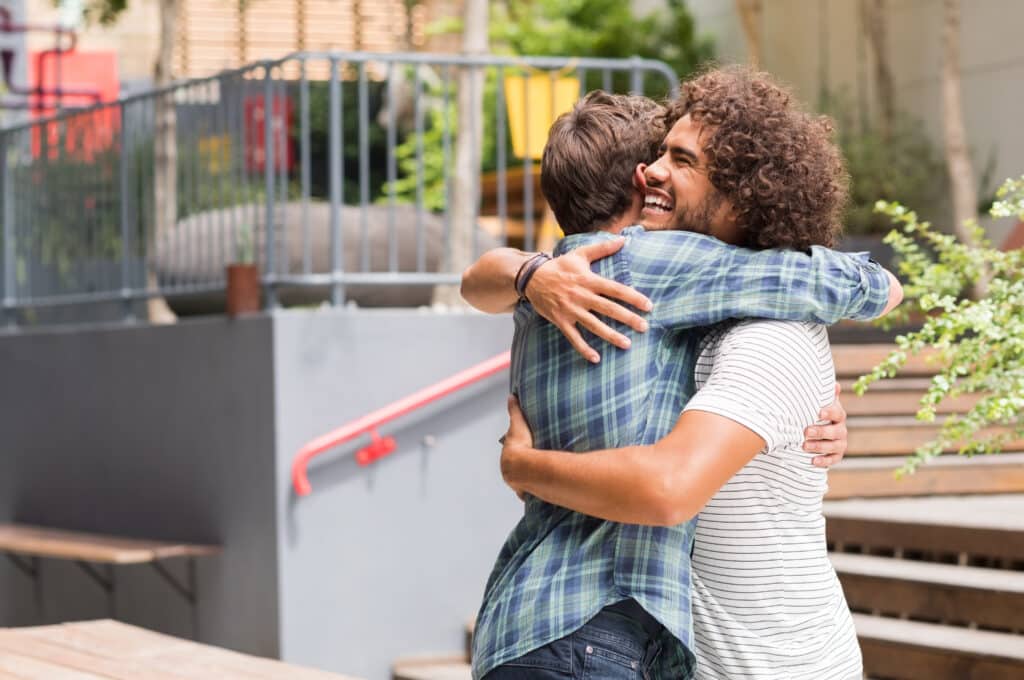 A government document published last night warned that “no situation is risk-free” and people “should still be cautious” when meeting others but set out steps to reduce the chance of spreading infection.

“As we proceed down the road map and as vaccination protects more of the population, the emphasis will shift from government rules to personal responsibility,” the document stated. “So instead of instructing you to stay two metres apart from anyone you don’t live with, you will be encouraged to exercise caution and consider the risks.”

It suggested people meet outside to lower the risk that virus particles linger long enough to pass on infection, and if indoors ensure that rooms were well ventilated.

“Open windows and doors, or take other action to let in plenty of fresh air,” the document suggested. “The more fresh air that is brought inside, the quicker any airborne virus will be removed from the room.”

Vaccines significantly reduce the risk of infection and the guidance suggests people wait for close contact until immunisation has kicked in, which takes two or three weeks after a jab. Older people or those with serious health conditions are more at risk from Covid-19 and “you might choose not to have close contact with an elderly relative at this point, particularly if one or both of you are not vaccinated,” the guidance said. It also advised people to “minimise how many people you’re in close contact with, and for how long”.

Johnson said that people should hug “if you think it’s appropriate, if you think the risks are very, very low. But you should exercise care and common sense. And clearly with unvaccinated people, there must be a greater risk of transmission than those who have had vaccination.”

Johnson emphasised that “outdoors is always safer than indoors, and if you’re meeting indoors, remember to open a window and let in the fresh air — keep getting tested regularly even if you don’t have symptoms, so you don’t spread the virus, without knowing it”.

He added: “Whatever you decide, I must ask you to continue to follow social distancing when not with friends and family.”

He said he was “optimistic that things will get back much closer to normality” after June 21 and promised that before the end of the month there would be “more detail about exactly what we mean by the end of social distancing”.

The Scientific Advisory Group for Emergencies has been urging the retention of “baseline” measures of social distancing measures beyond June 21 after modelling suggested a return to pre-pandemic levels of contact would see a big increase in cases.

The rules from Monday

• Up to six people or two households will be able to meet indoors and hugging will be allowed.
• Up to 30 can meet outdoors, or indoors in parenting or support groups.
• Pubs and restaurants can serve indoors but must be table-service and observe social distancing.
• Cinemas, museums, children’s play areas and other indoor entertainments can reopen. Cultural events such as theatre and concerts can restart with precautions.
• Masks will no longer be required in schools for secondary pupils.
• University students can return to face-to-face teaching.
• International travel is permitted but remains discouraged to all but 12 countries on a quarantine-free “green list”.
• Up to 30 people will be able to attend weddings, receptions and other rite-of-passage celebrations. Limits on funerals still determined by the size of the venue.
• Care home residents will be able to have up to five named visitors, with two visitors able to attend at once provided they are tested and follow infection control measures. They will also be able to leave homes without having to isolate on their return.