Treasury looks to sell another £1bn stake in NatWest 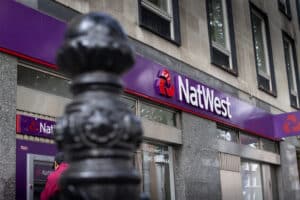 The government was last night trying to find buyers for more than £1.1 billion worth of NatWest shares after ordering the sale of a 5 per cent stake in the bank that it rescued 13 years ago.

About 580 million shares in NatWest, formerly Royal Bank of Scotland, were being offered to institutional investors in a placing that would reduce the government stake from 59.9 per cent to 54.8 per cent.

The share price plunged by as much as 5 per cent as Sky News got wind of the placing, which was later formally announced after trading finished for the day. The shares closed the day down 1.5 per cent at 197p.

The deal is likely to crystallise another loss for taxpayers, this time of about £670 million, as the shares are trading at about 39 per cent of the price at which the government rescued RBS.

In the depths of the banking crisis in 2008, ministers injected £45.5 billion of fresh capital into RBS after it was hit by massive losses on subprime mortgages and the disastrous acquisition of the Dutch bank ABN Amro.

An initial government stake of more than 83 per cent has been reduced by previous share sales, most recently in March when NatWest itself used spare capital to buy £1.1 billion of government-owned shares.

According to budget documents in March, the Treasury wants to divest the last of its shares in NatWest by March 2026, subject to market conditions and getting value for money.

The placing was being handled by Barclays, Citi, Goldman Sachs and Morgan Stanley. The Treasury has pledged not to sell any more NatWest stock for at least 90 days.

Appetite for bank stocks has been poor because of low interest rates and worries over Covid-related losses. However, sentiment has improved. NatWest shares have more than doubled from a September low of 93p. That was in spite of the revelation in March that it was facing criminal proceedings over money laundering allegations.

An announcement on the result of the placing and the price achieved is expected this morning.

Ministers are expected to weigh up a “dribble-out” to sell more shares as was done with the stake in Lloyds Banking Group. A market-maker would release as much stock each day as the market can comfortably accommodate. But for this to work well, there has to be not too much stock still in government hands.