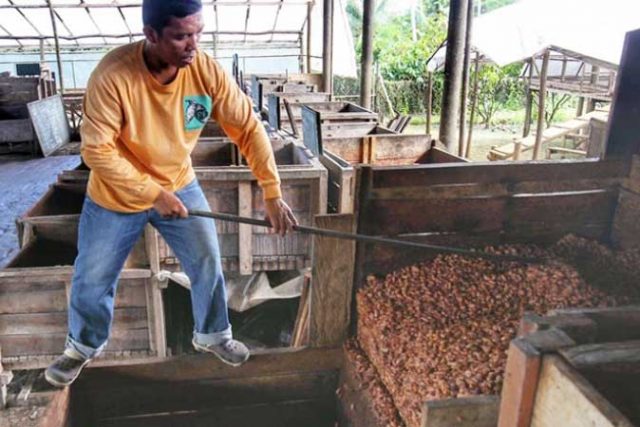 THE cacao industry is being positioned as a potential growth driver for the agriculture sector due to growing demand, but its rise will depend on the establishment of more postharvest facilities, according to a non-profit promoting the industry.

Marco G. David, Cocoa Foundation of the Philippines, Inc. (CocoaPhil) director, said in a phone interview with BusinessWorld that most farmers are reluctant to venture into cacao because the product requires processing to make the produce saleable.

“Unlike other crops like banana and mango that you can sell it after harvest, cacao needs to undergo postharvest processing. You have to ferment and dry it in order to monetize it,” Mr. David said.

Mr. David said the cost of investing in postharvest facilities needs to be weighed against cacao’s potential to be a strong contributor to the economy.

He said beans are currently exported to Switzerland and Belgium in the form of cocoa butter, which is used in pharmaceuticals and cosmetics, as well as cocoa powder for use in the food industry.

“Cacao is the next big thing. The industry has a lot of potential. You can export cocoa powder at P270 per kilogram, but the cocoa butter is priced higher at around P2,000 per kilogram,” Mr. David said.

He said the cacao tree only needs water and is perfect for “absentee” farmers with idle lots. The crop can only be grown around the equator in conditions of high humidity, abundant rain and ample sunlight.

“It takes around two to three years for the cacao tree to bear fruit. The harvest is estimated is to be around one kilogram of cacao per tree per year. If you have 1,000 trees, that is one ton of dried cacao beans,” Mr. David said.

“As long as your farm is properly irrigated, I recommend to plant cacao and let it grow. Even before you plant cacao, it already has a market since the demand is so high. We should exploit this since the country meets the requirements needed to grow cacao, such as the climate,” he added.

In September, the Department of Agriculture (DA) named Davao City the “Cacao Capital of the Philippines” after the city topped production within the Davao Region, which produced 5,960 MT in 2019, or 70.21% of cacao output nationwide.

Mr. David said some of the other provinces that produce cacao include Quezon, Laguna, and Batangas.

According to the 2017-2022 Philippine Cacao Industry Road Map issued by the DA and the Department of Trade and Industry (DTI), the government is aiming to produce 100,000 MT of fermented cacao beans by 2022.